I have continued to utilize my Leko converted spotlight whenever I need a gobo pattern for sessions. I find that projecting patterns of light invaluable for my client work. Here are some recent images created using this converted device. 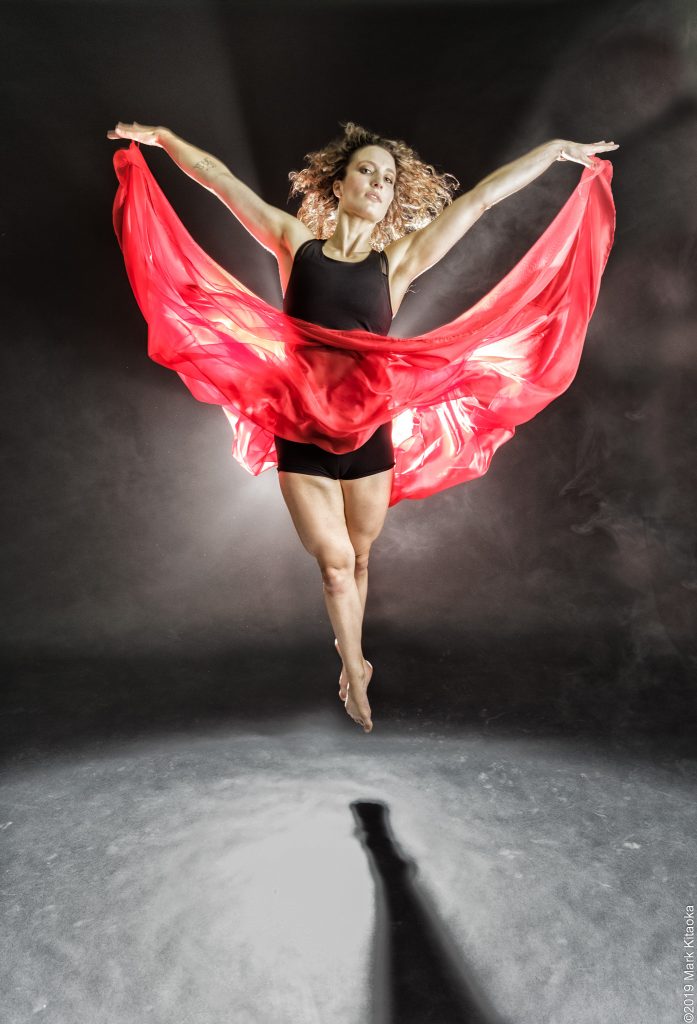 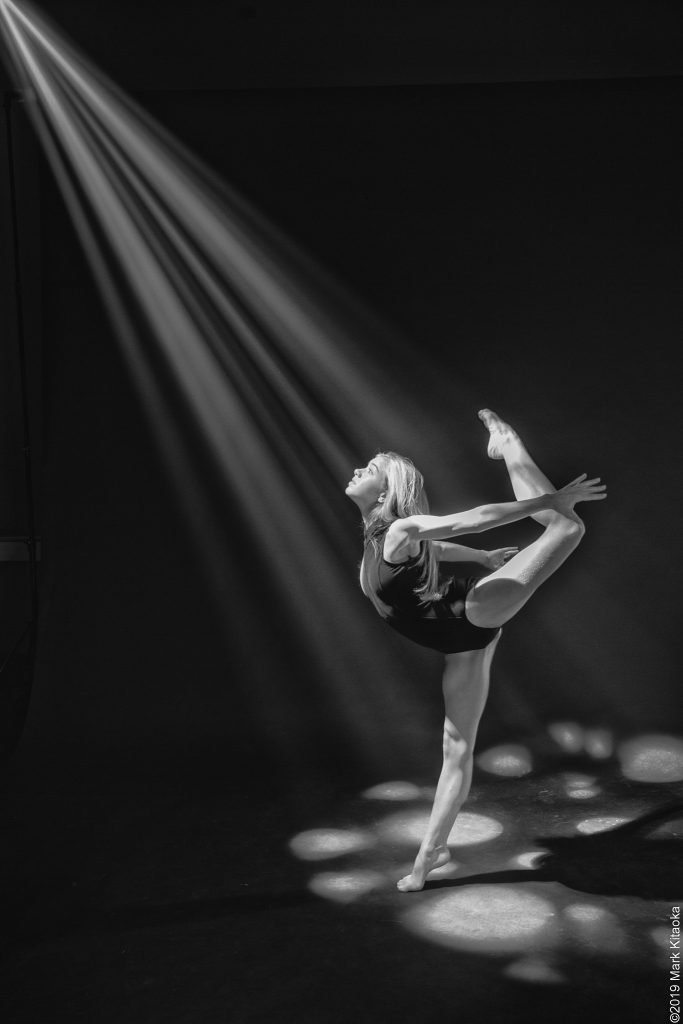 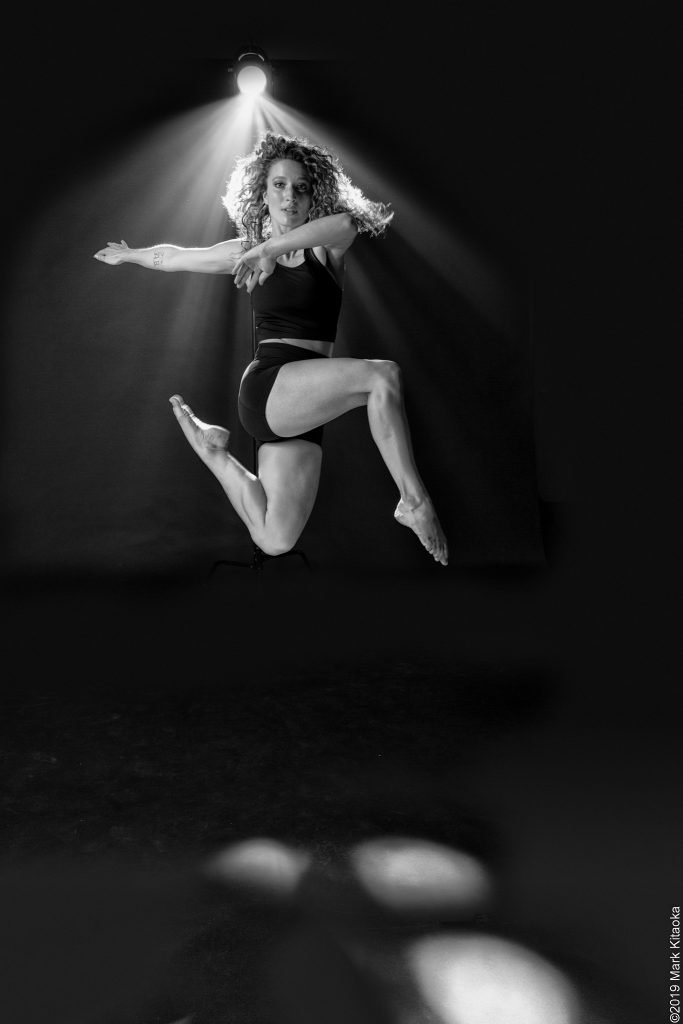 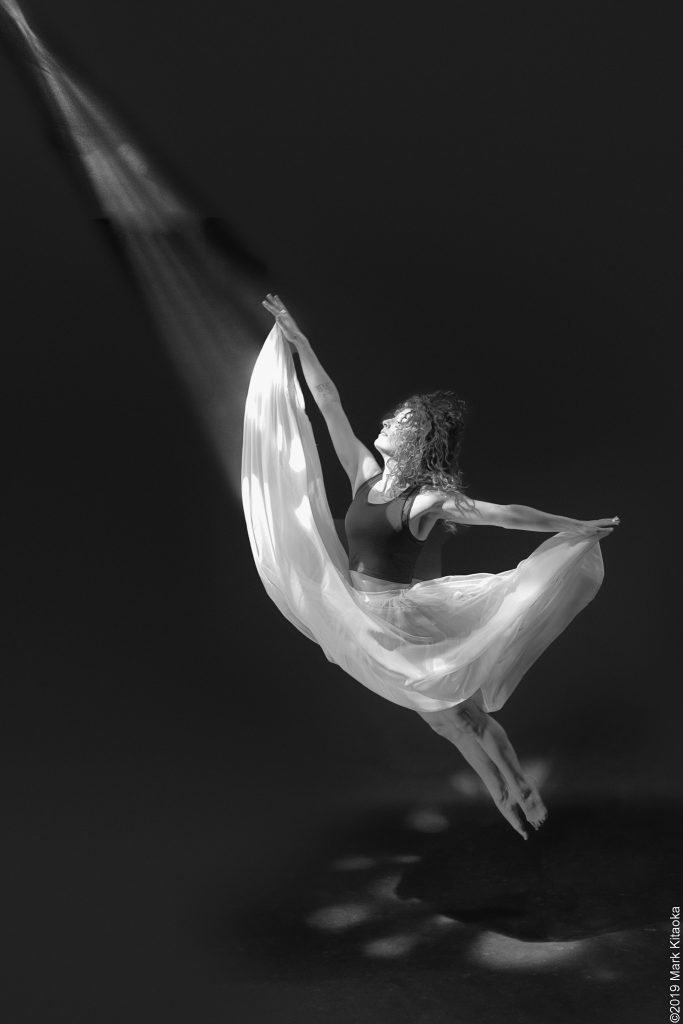 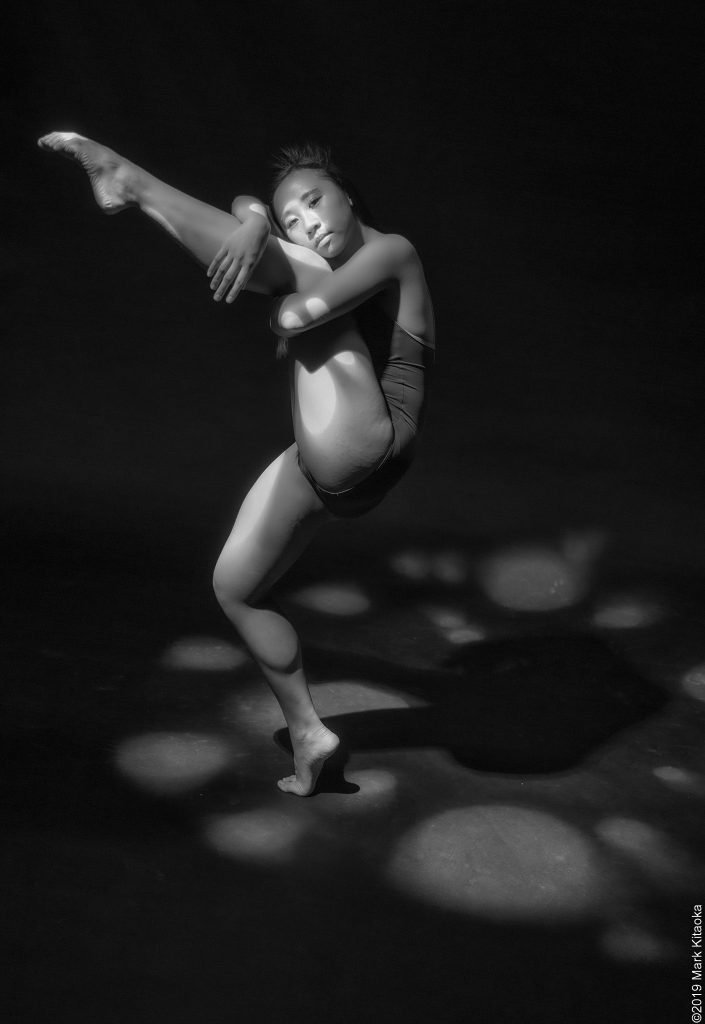 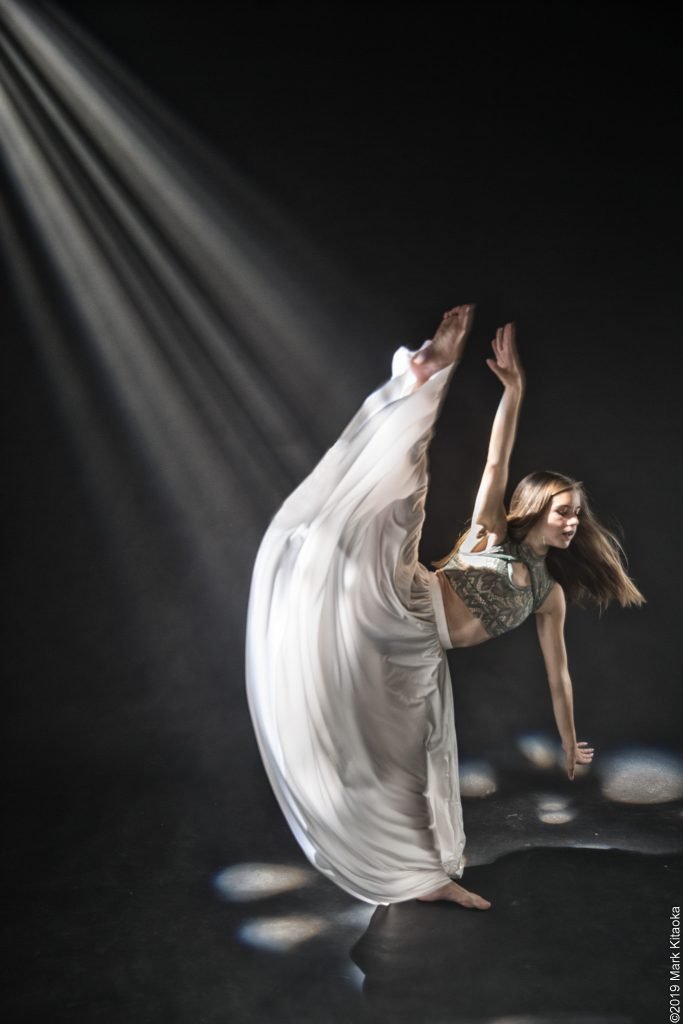 To date I have used this exclusively for local sessions for two reasons. First and foremost, should an airline lose my beloved device I cannot simply replace it through a retailer. Second it is large and heavy and I have not designed an ATA case for transport. Fortunately Adorama is now selling the Aputure Spotlight Mount in three different lens configurations. Although the device is marketed to the film making crowd it will be a godsend to those of us still photographers who use gobos. I plan to test one of these to compare it to my own device and if it proves to be of equal or better light quality I can then transport it via airlines without worry. Yay and fingers crossed.

Because I’ve changed from PCB Einsteins to Godox/Flashpoint 600s I needed to ‘convert my conversion’ to accept a Bowens mount. It was very easy since I simply bolted a Cheetahstand Low Profile Speedring onto the PCB umbrella reflector. His low profile speedrings allow the bulb to insert further into a modifier. Now I have the ability to not only use the 600ws heads but also the 1200ws head when needed. Very slick! 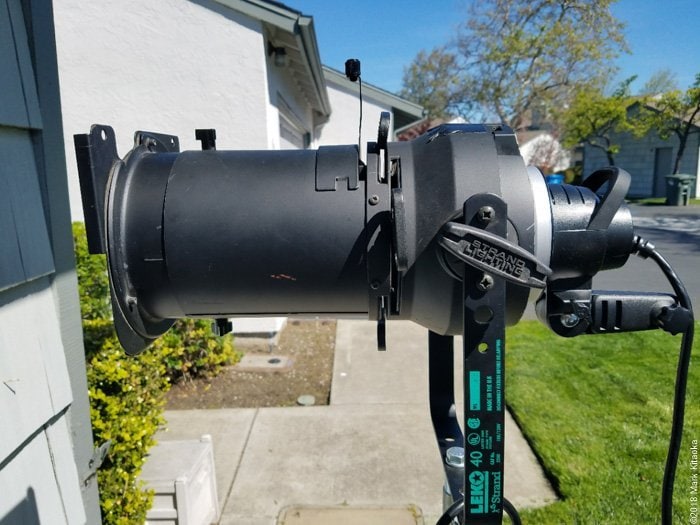 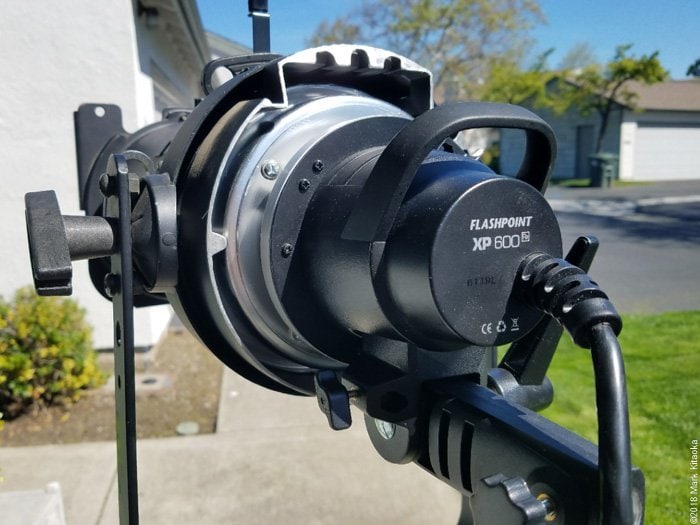 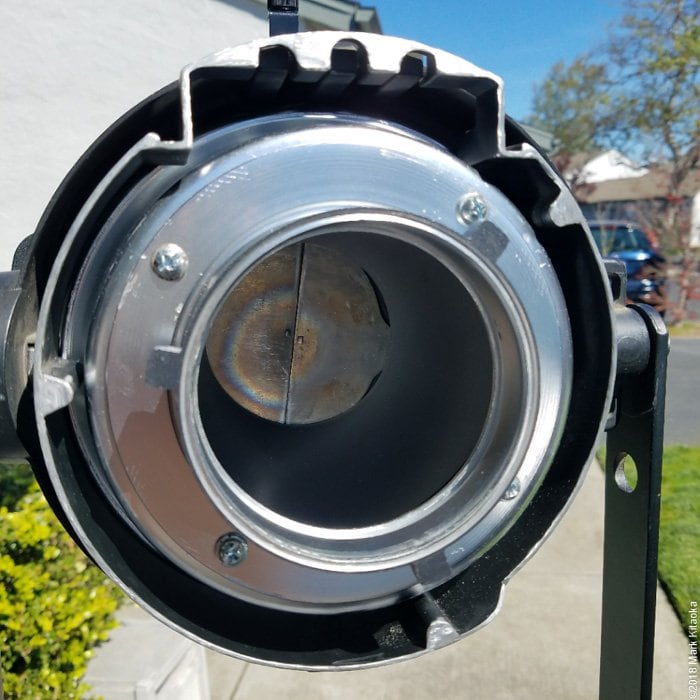 Why? My view is why not?! A few years ago a friend asked if I wanted an old Leko stage follow spot. Being a bit of a lighting pack rat I said “Sure!” I originally used it so I could apply light shaped with gobos in my still photography for dance. It also allowed me to create lovely rays of light using haze combined with different gobo shapes. In its original state the Leko was a 1000 watt constant tungsten light. Plenty powerful for stage applications, but completely overpowered whenever I used it in conjunction with my Einstein strobes. Even though the Steins can go as low as 2.5WS doing simple math shows you that at 1000 watts shot at 1/250th of a second yields about 4WS, not a ton of power.

So when I used the Leko in its native state it became very difficult to balance the power of the 1000 watt constant light with my strobes. So I decided to try to ‘modify’ it to accept an Einstein to keep all of the benefits of the Leko (glass lenses, gobo use, etc) with the power of a strobe. Also the ambient light created by the Leko’s constant light meant that keeping a low shutter speed to retain that light can create motion blur unless some of the strobe’s light freezes the motion on the parts it illuminates. And why even use a goboed follow spot unless I can see the pattern or light rays I want in the image!? UGH!

The tough part was figuring out ‘how’ to do it. Yes I’m handy and like to tinker and fabricate in the garage, but I don’t own a lathe, band saw, etc. After taking the Leko apart and doing some measuring I found that if I used a PCB Umbrella Reflector it would fit perfectly where the Leko’s tungsten bulb resided as long as I cut off the back half of the Leko

The tough part was the cutting and measuring. I don’t have a angle cutter so instead I used my trusty Dremel with their thick cut off wheels. Yes I went through an entire package of them and yes my little Dremel got so hot I wore gloves and had to take an hour break between cuts, but in the end it worked

I had written a previous article about making a ‘travel gobo spotlight‘ and no I won’t be ditching that one. The Leko is damn heavy and I’ll never use it when I travel, but it presents a very real benefit. I can use the Einstein modeling light all I want because the lenses in the Leko are glass. My ‘travel spotlight’ uses three plastic lenses and using the modeling light will melt them in short order. Plus I now have the ability to use two gobo capable ‘spotlights’ in any local session which presents new possibilities for my lighting needs.

Is it worth it? Only you can decide that for yourself….

For Everyone and For Pros
13 Comments
Oldest
Newest
Inline Feedbacks
View all comments
Paul H.

I really like the spot w/ gobo look for some work (particularly how you’re using them) and the Leko conversion is attractive with the added power.

Forgive me if you’ve written on this before, but have you looked at the Light Blaster (by Spiffy) projector? Seeing your love of creative tweaks and such, I’d love to get your take on it.

It would require adaptation for use with a monolight, but it uses Canon/Nikon lenses for focusing/projecting. This sort of tool seems more creatively flexible than a fixed spot fresnel, especially if you can boost its output with more watts than a flashgun. What say you?

Love the concept. Would need to get one to determine if I could adapt a strobe to it for more power. Thanks for letting me know about this product!

[…] that unit and still have the ability to convert it back to fit the Steins. Heck I thought if I can convert a stage follow spot into a modifier that can accept an Einstein I should be able to do that! Nope… So I purchased a Bowens BW-1878 High Performance […]

Hi Mark, about the leko you used – is that a zoom spot? Or was it a fixed focal range?

Hi Marcus the Leko Follow Spot I have only focuses and is not a zoom model. Having said that though I need to investigate something…..

Does this focus the light as sharp as a spot attachment or a projector attachment?

Marcus if you are looking for a sharp edge light, using a circular gobo in the Leko spotlight I converted is the answer. Much more crisp than a spot or projector IMHO. You could shave on the edge of that shadow! LOL

Thanks for the response. I’m going to try to make one myself. I’m assuming this eats up alot of light and requires a high output light.

It does not eat up that much light. I use a 600ws head in mine. Works fine.

Hi Mark, fantastic blog post, this is exactly what I was hoping to find. I also want to make a gobo modifier for my Einstein e640’s and like what you have done here. Can you give a couple more details to help my DIY attempt?

1) What Leko spotlight did you use or recommend?
2) Do you know a source for a good used unit?
3) Is this PCB 7″ Umbrella reflector the one that you used to adapt (The link in your blog doesn’t work)?
https://www.paulcbuff.com/Light-Modifiers/Reflectors/7-Umbrella-Reflector.html
4) How did you attach the reflector to the spotlight?
5) What size/type gobos does it take?

I really appreciate that you’ve shared this, I can’t wait to make one. Although I can tell it is heavy and cumbersome, I also just plan to use it in studio. I like that it’s glass and metal and I can use my modelling lamps to preview the effects.

Hello Will and thank you for posting your question here instead of through text or email. I am NOT a reviewer, but a working pro so I cannot afford to answer individual private questions that are often repeated. If you examine the Leko photos mine is made by Strand. I do not know the specific model, although the markings say “40.” Thanks for pointing out my link to the PCB reflector is broken. I corrected it thanks to you. Yes that is the reflector I used to fabricate the mount to the Leko. It uses the size B gobos which are standard in the stage lighting world. I HIGHLY RECOMMEND you purchase an Aputure Spotlight Mount Set instead of trying to convert a Strand Leko as I did. Had it been available at the time I would not have tried to convert the Leko. Plus the Aputure produces much less fringing than my Leko. It is much easier to convert it into a PCB mount AND has different lenses that you can purchase. My Leko just has one. Hope this helps.