I’m always surprised how the majority of posts on photography forums focus primarily on ‘gear’ and ‘which is better.’ It’s as if most people are vapor locked on what type of gear they purchase rather than improving their own skills. Yes, we all wish to improve our craft in creating images and gear is a part of that equation, but the amount of effort and discussion seems to focus on the exact opposite of what would improve one’s own creation of photos. If the amount of effort on gear was placed into other areas, ah but I digress….

Like most photographers be they pro or amateur, all of us know the excitement of getting what we think is a great shot and the desire to share it as soon as possible. In this digital age that means displaying your work through some sort of social media or other form of immediate gratification.

But in the commercial photography world, immediate gratification takes a back seat to business needs and NDAs. So much of what we shoot commercially is shot with extended lead times to be of any value. Marketing materials are carefully planned months or in some cases years in advance. As such, once the shots are in the bag it’s up to the client to decide on the imagery’s strategic timing for public release. And because of that we’re not allowed to display those images on our own sites or through social media. And by the time the images are released publicly we’ve been on to other projects for months. Whenever I receive a client’s marketing materials, I’ve often forgot that I shot that session!

I have two separate client sessions in this article. One was for Dallas Symphony Orchestra and another was for Village Theatre’s publicity for Les Miserables.

The photos I display here were taken in July 2013 and released to the public in late Fall of 2013, about four months after I shot the “Beets Campaign” (Beethoven Festival) for Dallas Symphony Orchestra. Performances begin April 28 2014, almost 9 full months from when I originally shot the session.

About two months prior to the shoot, the VP of Marketing along with some of the Marketing staff and I began a conversation about the overall look, feel and messaging they wished to achieve with the imagery. Rather than presenting musician’s in tuxedos playing music, the VP wanted a much more ‘scandalous’ look, one that coincided with the public’s reaction to Beethoven’s music in that actual time period. When written and performed his music was actually quite scandalous to the audience of that time. Music is all about emotion and the VP wanted a reaction to his campaign that would evoke emotion…and boy it certainly did and in a very good way!

We agreed that on location sessions would be much more effective than shooting the talent in front of seamless and then dropping them into graphics treatments. On location (I refer to them as ‘onlo’) is my favorite type of publicity shooting. Why? Well it forces me to be creative in developing the imagery by not counting on graphics folks to make the imagery have production value. The right location with the right lighting has a richness that just can’t quite be replicated with graphics. Well at least that’s my opinion… Plus I have to be both patient and think quickly on my feet about what the client wants and how I will execute it. The client developed Mood Boards and sent them to me so we could begin discussions on exactly the mood we wished to create for the campaign.

Most non pros have the impression that commercial shooters are able to scout locations months or weeks in advance and carefully plan out the angles, lighting and time of day to shoot. For me that happens on rare occasions and when that happens it’s a true luxury. But in this case the VP simply said, “I’d like to shoot it over at the AT&T Center, I like the juxtapose of a modern building combined with period piece costumes we’re using. We can look around at the locations when you get here.” For all of these shots I had about ten minutes to scout each location around the building and then decide how I was going to light them and shoot them. Should I use natural light? Which camera will be the best for this job? If I need more contrast how many negative reflectors should I use? Do I want motion blur in the image, if so should I drag the shutter or use second curtain sync with a Speedlight? What gels if any do I need to match the ambient? Oh I’m shooting in front of windows, how will I place the light/reflectors/etc. so I don’t get reflections or bounce off the windows I don’t want? (No I’m not of the school that all those things can be ‘corrected’ in post. Getting it right in camera is my preferred method) ALL of these decisions are made quickly because we don’t often if ever have the luxury of time. If you’ve never been ‘the talent’ or the art director, try getting IN FRONT of the camera and you’ll see what YOU consider to be a short amount of time while you are making your adjustments can seem like an eternity to your subject. 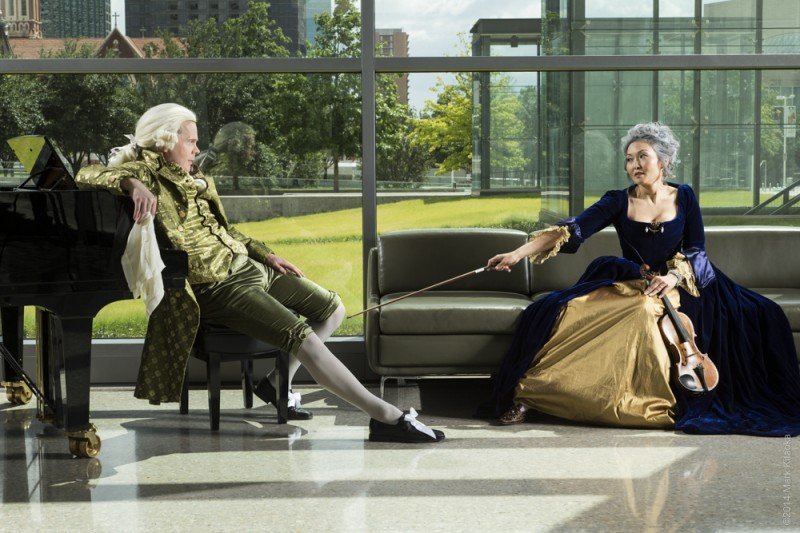 Four PCB Einsteins used. One beauty dish to camera left, one Einstein to camera right in order to illuminate her hair and two key lights to camera right. Keeping reflections off the windows here was key.

This publicity session was what I called my “First Date” with this client for publicity. I had been previously hired by them to shoot production of another performance, but had never been hired to do publicity. The Marketing Director had seen some of my onlo publicity imagery for other clients and thought it would be great to do one for their production of Les Miz. In this case we took a day to drive around the area to look for just the right setting. I knew that the location needed to replicate the script, stone walls, old wooden doors etc. As we drove around the area I found a couple of “OK” locations, but nothing that really floated by boat.

So I made a call to my partner back in the Bay Area. We normally work together, but since we were double booked (when you’re self employed I call that a ‘pretty girl problem!’) she was back home covering another client’s session. I asked her to get on the Web to look for an old church or rock quarry. In about ten minutes she called back and said “All of the churches close to you are modern and won’t do for what you’re looking for. I checked out a rock quarry very close to you on Google Earth. I can’t tell because the view is from their satellite shot straight down, but it looks like a a great possible for you. Here’s the address. Gotta run, heading to the client shoot, good luck.”

So the Marketing Director and I drove over to the rock quarry and I IMMEDIATELY fell in love with the venue. We spoke with the owner and he was more than willing to allow us to shoot there on the date we wanted for a couple of tickets to the performance. He even went on to say that if our date was when they were closed, he’d be happy to come in and open the place up for us.

So on the day of the shoot the weather was projected to be rain. The Marketing Director called me and said “Mark, what do we do if it rains, I’m nervous!?” I simply said, “If you can have three people there with umbrellas you don’t have to worry.” My plan was to have those three stand over my strobes with their umbrellas so that strobes and power packs were protected. I was actually hoping it would rain because I felt it would add to the ambient atmosphere of the shot and I’ve shot with my 1DX in full rain without a problem. On the day of the shoot, it did rain, but only lightly and the cloud cover was PERFECT for the session. For you gear heads I used PCB Einsteins and his Vagabond Mini power packs. Paul’s lighting is my preferred studio strobe equipment.

Being patient means KNOWING your equipment front to back, no matter what type of camera/lighting you’re using. Your client could care less if you’re using a Nikon, Canon, Fuji or other camera or whether you’re a Profoto fan or Uncle Bob’s strobe user. They could care less if you’re a full frame guy or gal, use a cropped sensor or not. The PICTURE tells the story and how well you know how to think on your feet, exhibit creativity on the run, keep the talent engaged and get a photo better than they ever imagined are elements that separate the men from the fan boys!

Whether you shoot for your entire income, are a ‘semi pro’ or just shoot for the pure enjoyment of the craft, be patient. For me that means taking the time to truly know your gear, all of it. Practice, read, experiment and have fun with what you already have. I get as much fun as the next guy when I want to buy something new. But the real difference is how I USE my gear, not what brand it is or its stats. To a client In the commercial world, you’re only as good as your last session. They’ve trusted me with their whole marketing campaign based on my shooting style and consistency in delivering a great product. Practice, know your existing gear and develop a body of work. One great shot leads to a second great shot. The difference between a good or nice shot and a great one is huge. And that comes only through forced patience.

The Magic of Collaboration

me feels really proud of you!
hugs