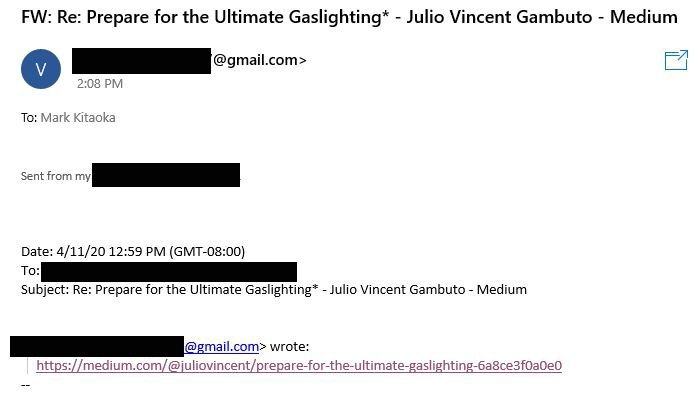 I am always a bit suspicious of FW:Re emails. Why? well the lion’s share of them tend to come to me from old people. People who are not motivated enough to send their thoughts about why they’ve forwarded the article to me.  Aunts, uncles, grandparents, you know who you are. Not that their intents aren’t warm, but most FW:Re  emails be they funny or serious or somewhere in between seldom strike me as interesting. A friend who has just suffered a personal tragedy sent me a FW:Re article titled “Prepare for the Ultimate Gaslighting* – Julio Vincent Gambuto – Medium.

So I started to read it because the title was interesting. And the more I read, the more it resonated with me. During the COVID-19 crisis I have often asked myself what the world will look like after it’s all over, as if it will ever really be all over. Julio’s article brings up some very poignant concepts:

“What the crisis has given us is a once-in-a-lifetime chance to see ourselves and our country in the plainest of views. At no other time, ever in our lives, have we gotten the opportunity to see what would happen if the world simply stopped. Here it is. We’re in it. Stores are closed. Restaurants are empty. Streets and six-lane highways are barren. Even the planet itself is rattling less (true story). And because it is rarer than rare, it has brought to light all of the beautiful and painful truths of how we live. And that feels weird. Really weird. Because it has… never… happened… before. If we want to create a better country and a better world for our kids, and if we want to make sure we are even sustainable as a nation and as a democracy, we have to pay attention to how we feel right now. I cannot speak for you, but I imagine you feel like I do: devastated, depressed, and heartbroken.”

Sure the “I Love Me” cell phone cameras are still going strong. But as he states we have been forced to stand still. Much like being forced to reflect on our day, our life, our choices late at night, this is a point in time we have a choice to reflect; or not. As a child I recall watching the 1951 movie The Day the Earth Stood Still. I marveled at the concept, even as a child.

A once in a lifetime event is not something I will waste focusing on just myself.