Ricoh recently released an update to Image Transmitter 2 which is now version 2.1.0. I had listed my frustrations with their prior version in my original letter to Ricoh below. In order to take advantage of the new version of IT2, you must update your 645Z’s firmware to version v.121 as well.

I just got done testing the new version and can report the following:

v2.1.0 works well and can be used with Adobe Lightroom v5.xx placing the images in a Watched Folder. None of the issues I sighted in my letter to Ricoh are present in the new version. I know that their update to Digital Camera Utility 5.3.1 now allows communication between IT2 and DCU, but I didn’t attempt to use DCU because my preference is to use Lightroom for my tethered capture.

I shot more than 100 images to see if there were any limitations on the number of images IT2 would display, but there were none. I will say that prior to the new IT2 release I had been using an Eye Fi Card sending small JPGs to my iPad through Shuttersnitch for wireless tethering. The transfer time is almost identical to that method even when sending PEF files to my laptop via a USB 3 cable. Since the time to transmit is the same I now plan on sending the PEF files to my laptop during client sessions. I will have an immediate double redundancy since the files will be on my laptop and on the SD cards. That’s always a great feeling.

I don’t believe transfer lag is due to anything other than the time the 645Z requires to process its images before sending them over a USB 3 connection or through a wireless ad hoc connection. It’s the same lag as waiting to view an image on the LCD screen after pressing the shutter. There is a noticeable delay. Much more so than my Canon 1DX or 5DIII. 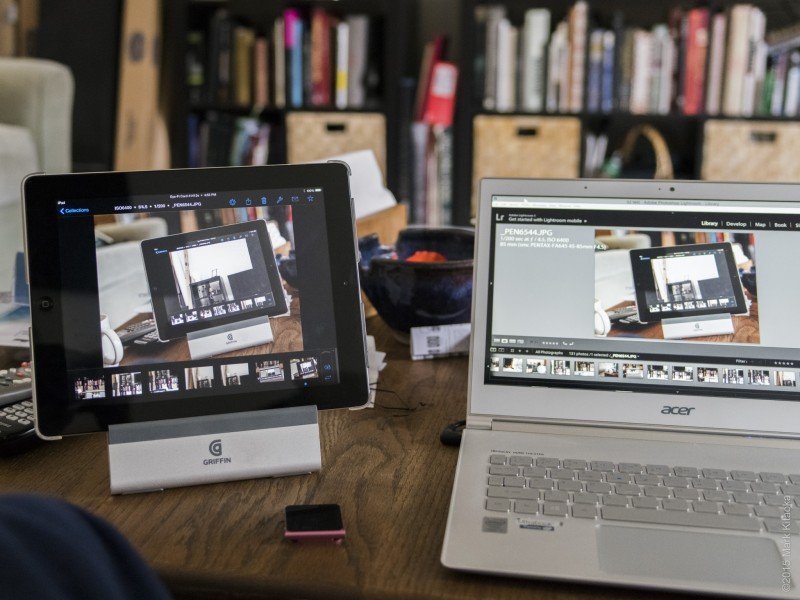 IT2 v2.1.0 now works well with a PC. A side benefit is having a dual monitor setup. Wirelessly transmitting small JPG files to my iPad through Shuttersnitch while simultaneously sending full size PEF files to a laptop through IT2.

A side benefit now is I am able to utilize a ‘dual monitor’ set up during studio sessions. I tested sending PEF files to the laptop and sending small JPGs concurrently to my iPad through the Eye Fi card. This will prove useful for me since I will keep the iPad near me to view the files and share with the talent while the Art Directors/Marketing personnel view the files on my laptop.

I plan to do a bit more testing before actually using my tethered solution in client sessions and will report any more finding here. For now though I am thrilled that wired tethering works with the 645Z.

This is my open letter to Ricoh regarding their tethering software for the Pentax 645Z medium format camera.

I had written an open letter to Ricoh about the issue and never got a response. So instead I posted my ongoing frustration on their Facebook page and got an immediate response. Keep in mind that I am using a PC, NOT a MAC or a Mac running Windows emulators. I have attempted to run IT2 on both a Windows 7 and 8.1 on different machines.

In working with one of their tier 3 support men and allowing him to use “Join Me” to view my computer screen he sent my issues to Japan for evaluation. Today I tried what they had suggested, to completely turn OFF all Lens Correction options. Guess what?! The program began to work transmitting files to my computer and thereby allowing me to create a watched folder in Lightroom. The caveat? After ten images the program froze and would no longer allow me to transfer files to the PC or the Z’s cards. Again the information will be forwarded to Japan for evaluation.

Am I happy that the program still does NOT work? No, but I am a bit relieved to know that what I was experiencing is NOT an anomaly or that I’m completely off my rocker….well I am, but not because of the software. BTW I found it interesting that the transmission time from pressing the shutter to when the file appeared on my screen to be ‘about’ the same time it takes for a file to appear on my iPad through the EyeFi card, which has been my interim solution.

More as this develops…

I just received my order from BH Photo of your Image Transmitter 2 software. I must say that I could not be more disappointed. The Pentax 645Z is a brilliant piece of hardware, but just like so many Japanese manufacturers of hardware, the software and its interface is really quite poor.

I am running v1.20 of the 645Z firmware. After installing the IT2 software on two separate Windows 7 and 8.1 machines I could not get IT2 to download any of the images from the camera to the computer. I could control the 645Z through the computer interface, but Live View only successfully appeared ONCE in the software screen interface. Live View button in your interface does NOT toggle the LV on and off as stated in the very poorly written user’s manual which must be downloaded off of your site rather than included with the 200.00 disk. Again an extremely poor oversight to not include instructions as a PDF on the disk itself. 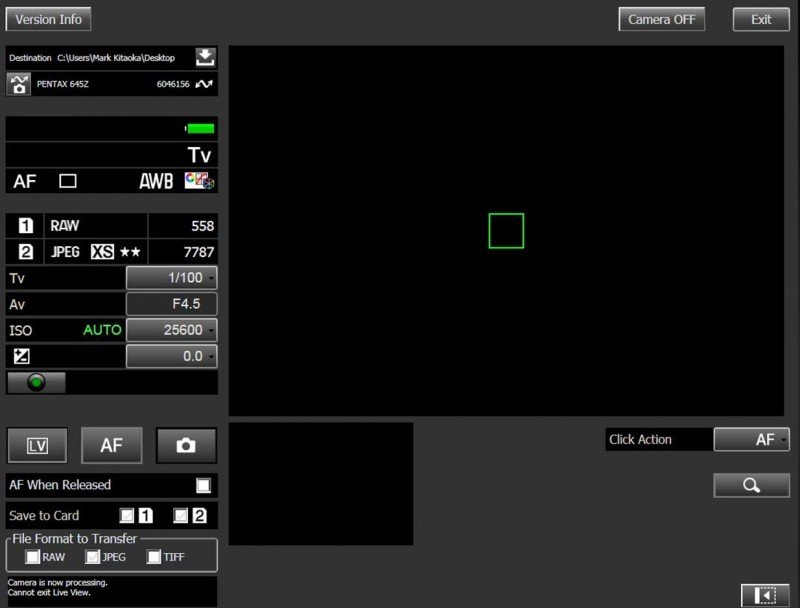 Files are NOT kept on the 645Z whether or not the Save to Card selections are checked. Also when I attempted to select Live View once shooting was over, it didn’t allow me to do so with the message: “Camera is now processing. Cannot Exit Live View” even though over 10 minutes had passed.

Also in Windows 8.1 the top menus do not appear, Version, Camera Off and Exit.

When I attempted to exit the program it does not exit properly and must be forcibly stopped in Windows no matter what version of the operating system I’m using. And once I disconnect the USB3 cable from the 645Z the camera will not completely shut down unless the battery is removed. In the LCD window on the top of the camera shows number of remaining shots for both cards appears in the LCD panel along with the battery level even when the power switch is set to “Off.” If I turn the camera back on I am able to fire the shutter, however the hourglass on the rear Live View panel simply contains a perpetual hour glass, no image appears. Removing the battery completely shuts down the camera.

Once I attempt to view any images, none appear since nothing has be written to the card or the computer no matter how the Save to Card or File Format to Transfer is set.

My camera is set to PTP for USB Connection.

I am using version 2.0.0.0 of your IT2 software. As a working commercial photographer in the US my workflow depends on being tethered for client work. I will await your response to my concerns before attempting to return what I consider to be pre release beta software to the retailer. Please advise me if I’m doing something incorrectly in attempting to use your software. 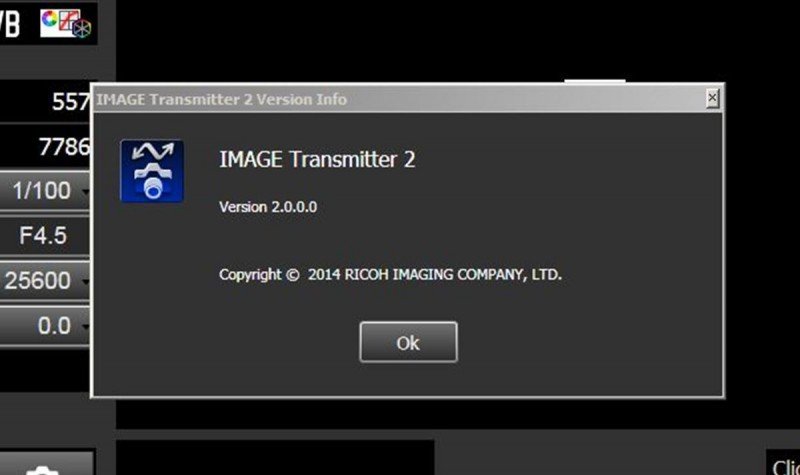