One of the features I wanted to incorporate into the Tread was their watch which was to be released in January 2016. In checking their website their watch has been delayed at least three years. I found a solution to this issue by a company called Treadlinks in Canada. I recently purchased a mechanical watch by CountyComm called the Maratac 46mm Pilot which was on sale during this past holiday season for a reasonable 219.00. I have a Tissot titanium Quartz watch, but wanted a mechanical one so I ordered a 22mm pair of stainless steel Treadlinks for my Maratac Pilot. After receiving them today here are my initial impressions:

I will continue to update this as time passes with my experiences with the Treadlinks.

After having/wearing/using my Leatherman Tread for a little over a month I wanted to talk about my experience. I’m often amused by some of the other sites which have reviews about this ingenious device which list it simply as jewelry. I personally don’t think it’s that attractive ‘as jewelry’ but in truth I could give a shit about how it looks. As a constantly traveling photographer it’s not always easy to remember each and every item I need or may need on a shoot. So much of my gear uses fasteners, Phillips head, hex head and metric nuts and bolts. Try as I may to keep the ‘real tools’ at hand inevitably I will either forget or misplace an Allen wrench, screw driver, or my mind.

I have now been on four round trip domestic flights for work and the Tread has never been questioned by the TSA. Nor has it ever irritated my skin or the hairs on my arm. And below are some of the tasks it has accomplished while I’m on the road: 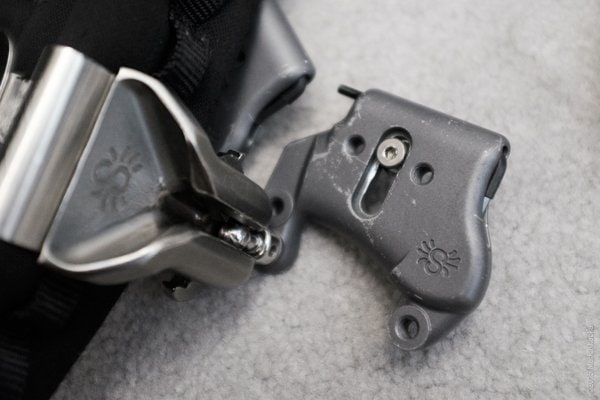 I’ve always hated camera straps so long ago I switched to the Spider Camera Holster System. Although they have cleverly incorporated a capture space for the included allen wrench, one had slipped out in my ‘other’ camera bag. Had I not had the Tread, I would have been hosed…

So for my work and my needs the Tread is a fantastic device. I never forget it, it’s always there…unless of course I forget it someday! Does it replace my SnapOn tools? Nope. Does it have a pneumatic impact driver, nail gun or air compressor? Nope, but for anyone that seems to think an emergency device like this replaces regular tools, well we seem to disagree on the purpose of this device. And that’s perfectly OK by me. Is it worth the price? That’s up to each individual. Would I buy another one again if I lost this one…ABSOLUTELY.

My father was what is known as a ‘hard ass’ plain and simple. He was from what Tom Brokaw refers to as the “Greatest Generation” and with good reason. He taught me many valuable lessons or more accurately he “got them through my thick head” and many of them stuck. One of the things he instilled in me was to always be prepared, the Boy Scout motto. “Boy every man should always carry three things, something to start a fire, a pocket knife and a flashlight. If you find yourself stranded, those three tools will help you survive.” This was WELL before LED lights and against his sage advice I just could never bring myself to carry around a D cell flashlight. If he were alive today he’d marvel at LED technology or our cell phones that use their flashes as make shift flashlights

So throughout my life I heeded his advice and when LED lights came out I carried all three items he admonished me to carry; a pocket knife, a LED Photon light and a lighter. And although I never found myself in ‘dire’ circumstances each one of those tools served me well throughout my life

I had never been a fan of Leatherman multitools as a daily carry simply because I really didn’t want to put something that large into my pockets or wear it in a sheath on my belt. I do have several in my tool boxes and marvel at their usefulness and build quality. I use to carry one in my briefcase on all flights I took as a corporate suit

Post 911 all of that changed. No more knives, tools or anything else that could be considered a ‘weapon’ was allowed on board. I fully understand those rules and abide by them, but back in the day Dad showed me how to fashion very effective weapons out of pencils, pens and a rolled up magazine. Anyway I missed ‘being prepared’ by not having a pocketknife or lighter with me on my trips.

Today I took possession of the new Leatherman Tread. It’s TSA approved for airline travel and is quite remarkable in its design and function. Would it win any fashion contests pitted against the latest fashion jewelry? Most likely not, but since I prefer to dress just a step above a homeless person, for me function always trumps fashion.

Why would a photographer be interested in such a device? Well since all of my work is on location or in rented studios having a tool that functions for some of the things I may forget is invaluable. Even more so being able to have it on my person just gives me a personal sense of security. But then again I’m the guy who keeps enough food and water in my vehicles to last three days!

There are plenty of sites which show its function, but I’m including their pre release video here:

I’m not a big fella and have smaller wrists. To fit the Tread to my wrist I simply removed two links, ones which I doubt I’d use much, the large standard screwdriver and the large Phillips screw drivers. They smartly include one link with both a #2 Phillips and Standard flat screwdriver, so I’m not without. I was worried about the feel of the Thread against my wrist, but after wearing it that concern disappeared. The design of the bracelet is curved and I do not feel any of the tools. It’s about as heavy as my watch if it was made out of stainless steel, my watch is titanium. A remarkable tool that I plan to wear every day.

If Dad was still here I’d get one for him in a heartbeat. He would simply say, “Well at least I know you listened to me once in a while Boy!”