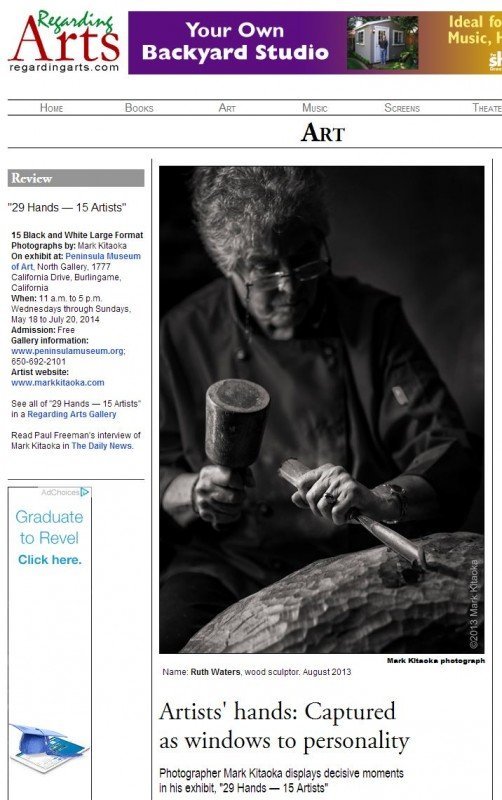 When most of us attend Open Studios, we look at the art. When photographer Mark Kitaoka attended an Open Studio weekend at the Peninsula Museum of Art in Burlingame, which rents studio space to artists, he looked at the artists’ hands. And he thought of photographing the hands of the artists, at work.

Kitaoka: “I began this project because of my lifelong fascination with human hands. For me, hands are second only to our facial expressions in expressing how we feel about our world.” He continues: “Hands caress or protect those we care for, grasp for what we feel is just out of our reach, betray our words, accentuate our anger, and build or create that which our minds image.”

Kitaoka’s fascination with artist’s hands led to a series of thirty-four large-format Fuji Pearl photographs depicting creative processes in lustrous black and white. Fifteen of them, featuring twenty-nine hands — one of the artists is an amputee — are now on view at the museum’s North Gallery, through July 20, 2014.

They’re accompanied by brief explanations of the subject matter; useful information, since Kitaoka expanded the project beyond the visual artists who inspired the exhibit to include Bay Area and Seattle writers, dancers, designers, musicians, and conductors.

Kitaoka, an accomplished, versatile photographer, captures such drama in these decisive-moment studies of artists’ hands that they end up being portraits of artistic personalities, in the manner of Arnold Newman, as well depictions of types.

Kitaoka notes that when he photographed the hands of wood sculptor Ruth Waters (who happens to be the founder of the Peninsula Art Museum), she was so engrossed with her chisel cutting into hardwood that she seemed oblivious to his presence.

That would seem to be true also of the shots of Adrian Blue, conducting, his hand signs ablaze with a burst of backlighting; Leigh Toldi, intently focused on the world emerging in her tiny drawing; Michelle Cabinian, singing, eyes closed, phrasing a passage with her hand no less than with her voice and posture; and Robert Kelley, rapidly leafing through a musical score, his hands a ghostly blur.

The faces of Eunice Chan, Wayne Wichern and Werner Glinka are not shown, but their hands are eloquent substitutes, revealing hard-won discipline, skill and focus.