While visiting Luna Cycle I contacted Josh from FFH to see if I could pick up one of his lights while I was in the LA area. He was kind enough to drop it off with one of the Luna staff so I brought it home with me and installed it. Later tonight I will be testing the light quality and the pattern, but based on his videos I’m sure I’ll be pleased.

These images are screen grabs from FFH’s Facebook video which shows the difference between the stock Sur Ron light and the FFH at 3200 lumens.

Installing the light is straightforward with some caveats. First the plugs supplied with the light are NOT simply plug and play with the Sur Ron plug harness for the stock light. I ran some tests to determine which color wires go with the FFH and the Sur Ron:

Connecting the wires in this manner allowed me to use the stock Sur Ron plug located under the ignition switch. Simply cut both connectors off of the stock head light and the FFH and join the wires as I’ve outlined above. (They include two crimping connectors, but I chose to solder the connections and shrink wrap them. It’s just my personal preference for all things electrical.) Then plug the stock connector into the wiring harness on the Sur Ron and you’re all set. I’d like to see FFH supply the correct connector to the Sur Ron in future editions.

The light is held with two milled aluminum 31.8mm brackets which are mounted on the handlebars. They’re well made, but I’d like to see the female receiver on the mount tapped into the bracket rather than using a lock nut. I have other mounts like this one and having one bolt rather than a bolt and a nut makes for a cleaner installation process. But the parts fit perfectly on the Sur Ron handlebars and I like the light being just a bit higher than stock. NOTE Josh let me know after reading this review that FFH had originally threaded the female side, but it could be cross threaded due to differing variations of 31.8mm bars, which would have the bolt enter at the wrong angle, hence their switch to a locking nut. 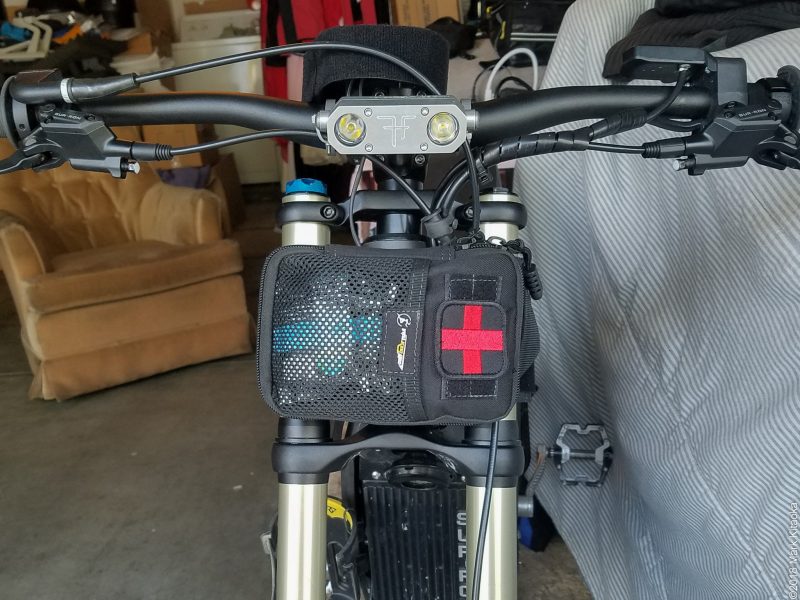 Unlike all of the other lights I own the FFH light uses what I call a ‘step less’ switch. Sure you have to press it to activate, but until you press the button, the light remains off. I much prefer this to the stock light which is always on; because there are times I don’t want to be seen from the front with a light I cannot control. This is a 3200 lumen light at its brightest setting, much brighter than the stock headlight. The reason I call it step less is based on FFH’s instructions:

“Your light has 5 separate modes which you activate using a single button. Select any mode by quickly tapping the desired number of times regardless of the current mode.

Our ultimate high power LED light for those of you who want to see and be seen. We built the 12 volt Ultra specifically for use on the Sur Ron and it’s capable of an ULTRA bright 3200 lumens.

Over the years of development we found that color spectrum was important. The Ultra 3200 uses 5000K CREE LED’s to give riders the best depth perception and visibility.

As an example if I’m in the Bright mode and want to go to the Ultra mode I rapidly press the button four times, not two which would be like other lights. There is no click or tactile feedback to the button press, so just be aware of that.

The light pattern of the FFH is just my cup of tea. Just like in cameras marketing people brag about megapixel count and in light it’s lumens. But so many lights I’ve used for my bikes have gigabillion lumen counts (marketing BS) but the pattern sucks because it’s pinpoint. I want a light pattern that is wide AND long in distance and the FFH has that in spades. I am so pleased to hear that Josh has taken into account the color temperature of the light 5000k, which is very close to the 5800k photographers like, sunlight! And it’s true the depth of field view is wonderful with his light. Bumps and irregularities are easily seen in the dark. The other element that pleases this photographer is one of the two lenses used in the FFH headlight is a Fresnel! I believe that is what he uses for the width portion of the light and the other lens is the more focused one for distance.

The following are my actual photos of the FFH at three different levels:

The light pattern is both wide and deep which is something I so appreciate in a trail light. I can see why Luna has the FFH listed on their site. It’s a remarkable value at its current price point of 199.00 USD. I’m very happy to have purchased this light which is invaluable for night time trail riding. If you just want to be seen by traffic on the road, the stock Sur Ron head light is fine. But if you want a great headlight not just to been seen in traffic but to increase your trail night vision, buy the FFH. It’s really that well-made and designed. If you do order one, make sure to specify that it’s for a Sur Ron 12v bike.

Mr. Kitaoka,
Really enjoyed and learned much from your informed and experienced opinions. My “Wall-E” is suppose to arrive today.
Like yourself,I have ridden daily (weather permitting) & raced over 50 years on the street and off the road. Seems the older I get the smaller my motorcycles & chainsaws (hey it’s N.W. Mt. 🙂 get.
Look forward to future updates and learning more. Surely hope Luna gets more Sine X-wave controllers. Their 60 tooth rear sprockets and engine guards are back ordered to Dec. Must be demand.
Thank you.
David Brown
Eureka,Mt.

Hi David I hope you enjoy your own “Wall-E” as much as I have enjoyed mine. Like you my bikes get smaller and lighter than when I was younger. I too hope that Luna receives more X controllers since it’s really a great addition with ‘engine braking’ and regen power. It’s just much smoother as well. I believe the 60t and bash guards are still in stock the last time I checked. Have fun!

David I created a site just for the Sur Ron. It can be found at:
http://www.sur-ron.markkitaoka.com