Necessity is the mother of invention – UPDATE January 5 2018

During a client session they allowed me to experiment using my Elinchrom 69″ with focusing arm. Here are the results

This month I have several sessions where I will use the focusing arm with my Elinchrom 69″ Rotalux Octabox. Elinchrom sells their Elinchrom 75″ Indirect Litemotiv Octa Softbox which is an inverted modifier. But unlike using a focusing arm the strobe is confined to a set distance from the modifier. Oh and not to mention it’s about $1100.00 USD more expensive than my 69’r!

Over the past two weeks I have been giving my new virtual friend Ulysses my experience using focusing rod modifiers. We’ve gone back and forth over FB Messenger as I answered some of his questions and concerns. It was during this time I realized that some people may not have any idea how a focusing arm paired with a parabolic or other modifier would benefit them. So instead of answering another email I decided to post this (My last post of 2017 btw) to benefit anyone who may have questions about focusing arm modifiers, their benefits and downsides. But are put off by their prices.

I found what I view as one of the most informative lessons on some of the benefits of a focusing rod on a YouTube channel. Karl Taylor and Urs Recher, two pro fashion shooters do an excellent job explaining the benefits of focusing arm modifiers. You can view that video here.

If you begin to watch the video and think or say to yourself “Oh sure if I had the money to buy a $7,000 Broncolor Para 222 Mark I could do anything!” STOP READING NOW and go about your usual business.

I’ve posted elsewhere why I have switched to focusing arms modifiers and this post is about how you can do it with relatively simple ease. And just as important for a fraction of the cost of Broncolor, Briese or Parabolix. Of course the shape of the modifier you use will have a bearing on your results, but unlike people alleging you ‘have to have’ a pure parabolic shape I disagree based on my own actual usage. I love my Parabolix 35D, my Cononmark 120cm and my Westcott Zeppelins which I use with a focusing arm.

The best thing to do is to buy a Parabolix focusing arm from their site. They use a standard Profoto attachment to mount their modifiers to the focusing arm. The arm is excellent and well made. To attach the arm to any Bowens modifier you simply purchase a Haoge Profoto to Bowens Mount Speedring Ring Adapter. 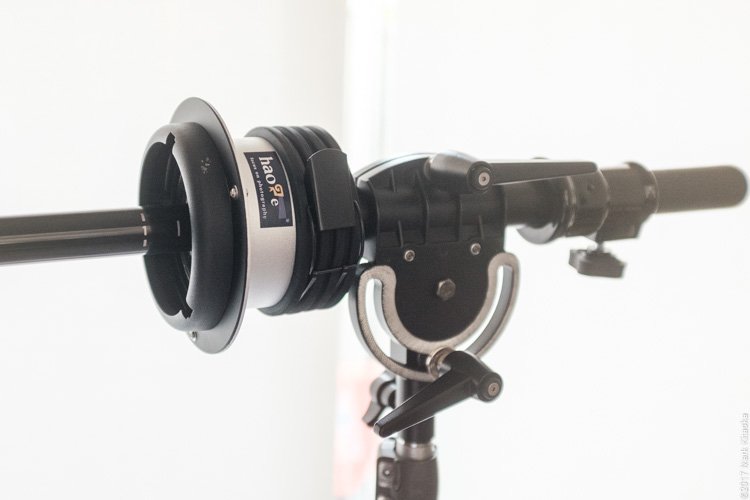 Viola! You now have a focusing arm that will work with any Bowens modifier! And you don’t have to go through the crazy fabrications like I did when I built my first one. (I just like doing that kinda stuff tho….)

Prior to figuring out that method I fabricated all kinds of things! My other solution was to purchase a Cheetahstand Chop Stick and modify it to accept a Bowens modifier. It took some doing and it works well. Someone mentioned that Edward at Cheetahstand stated that his Chop Stick will work with most Bowens mount modifiers and that’s true….to a point.

For travel it’s a toss up. My DIY Cheetahstand Chop Stick with mount weighs a total of 4 pounds 13 ounces including the rod. The Parabolix weighs 3 pounds 15 ounces. For space the Chop Stick comes apart thereby having the ability to save space when packing. Not so with the Parabolix arm. Weight or space? It’s up to your needs. The Bird Cages which hold the lights are not included in these weights, but I have described their weight above.

So there you have it. This will be my last post about how to develop your own focusing rod. I have sessions to cover and don’t really have the motivation to talk more about this subject. I post this in case you want to do it as well.

As I was growing up my father was always in the garage tinkering. During his lifetime he was a professional auto mechanic who was in a partnership in a Mobil Gas station. I’d work there in the summertime when full service was the norm. Later he became a civil engineer. He and I shared lots of good times in our home garage building things which were usually motors or crazy inventions. One of the aspects of life he taught me early on was “Boy there are people who will bitch that someone hasn’t invented or built this or that. Or they’ll bitch about how something is designed. Basically they’ll bitch about anything instead of trying to figure out how to fix it or inventing something themselves. Don’t listen to those assholes, if you need something that ain’t around, figure out how to build it and build it. I’m not raising no bitch, so just remember that!”

To this day I’m not sure if I never wanted to be ‘a bitch’ or I just plain enjoy figuring out how to do things. It’s one of the main reasons I HAVE TO HAVE a garage. Not to store shit people never use, but to fabricate things. I find it relaxing. And I must admit that my former racing motorcycle which is now the world’s most expensive towel rack does sit in my “Man Cave.” I just can’t bring myself to sell “Ashley.”

But many of my modifiers are now Bowens mounts. It’s my preferred modifier mount since I exclusively use Flashpoint/Godox strobes/heads now. As I examined Cheetahstand’s Chop Stick I discovered that I could modify his focusing arm so that it will allow me to attach ANY Bowens mount modifier to the focusing arm! It took quite a bit of modification and a bit of cussing, but now I have a focusing arm that will accept any Bowens modifier INCLUDING HARD MODIFIERS. What? WTF you may be thinking, hard modifiers Mark? Well I’m gonna try them and will report back later. Why not?!

I’m sure some people will ask questions like “Will it support the full weight of X or Y strobe?” What about if the modifier is not a true parabola?” To the first question, I’m not sure and I don’t really care because I’m not a manufacturer of this for retail. I made it to solve a problem. I plan to always use the remote head for the AD600. As for the second question, who cares?

Would the Elinchrom Rotalux Speed Ring for Profoto Strobes (EL26531) basically be the most simplest alternative to the Haoge’s solution if paired with the Parabolix’s focusing arm?

Hi Paul the answer is absolutely yes. If I used only Profoto modifiers I could use any of them with the Parabolix arm.

Thanks Mark. Can you tell how soft the Eli 69″ is if shot indirectly with the outer diffuser?

Sorry Paul I’ve never done that nor do I plan to. I can say that inverted and fully flooded the coverage is very even.

I was wondering how is the light different from a similarly large indirect Parabolic at flooded position, probably just a different catch light.

Hello Mark, as a frequent user of the Rotalux octas with Godox/Flashpoint gear, are you using the the newer Rotalux speedrings for Bowens S-Mount (EL26541)? If so, have you had any issues with them? I’ve had one of the clasps pop off on several of these over the last six months and am wondering if you’ve experienced any similar issues.

Jarette, I’m not quite certain about your comment, “I’ve had one of the clasps pop off…” can you explain a bit more? Are you referring to the Bowens three squares that hold the modifier onto a light? I have several of the newer speed rings.

Sorry, I was referring to the spring loaded sockets where the rods go into. I’ve had these completely pop out of the speedring on the newer models while assembling or disassembling.

Jarette, OK I was confused. I have disassembled an Elinchrom speed ring. Each individual socket is internally spring loaded and have a cross bar that keeps them in the actual ring housing. Unless the rivets that hold together the actual ring halves are loose I’m not quite sure how they would come out. I’d definitely return them as faulty.