“I Only Use Natural Light”

Yup I remember saying that very same thing in an intentionally arrogant tone. Truth be told back in the day, I didn’t know how to use artificial light effectively whether it was from a strobe or hand held flash. Sure I had ‘dabbled’ with them, but didn’t understand the first thing about using either very well.

I began my photographic journey doing street shooting. No artificial light, no reflectors, no scrims, just what being in the right place at the right time had put before me. After that initial fear of shooting strangers going about their daily lives street shooting became invigorating. Looking for the ‘right’ person, in the ‘right’ situation, in the ‘right’ light meant being visually vigilant and above all being patient. To this day it is still my favorite type of photography, but I’ve been both blessed and cursed to not have the time to pursue it as often as I have in the past.

So in this article I want to talk about shooting tips in natural light whether you’re street shooting or creating a portrait. I’ve always been a bit of a do it yourself kind of guy. I loved making my own reflectors and light modifiers before I realized that the time it took me to do so was too time consuming. Like most photographers, in the beginning I had little money to buy ‘gear’ for my hobby. So my reflectors were white foam core boards, until I discovered that white cardboard held up better in the wind. I used whole rolls of aluminum foil to make a silver reflector on the back side of the white cardboard panels. I discovered that wrinkling the foil before taping or gluing it to the cardboard made for a ‘better quality of light.’

I have developed my own rule for shooting whether by natural or artificial light. I call it “The LEE” principal: Light, expression, environment.

Available Light/Street Shooting
How to get over the jitters about photographing strangers on the street is an article all unto itself, so I won’t go into it here. The main elements you should consider when looking at potential street scenes:

1. Tell a story, including the environment is as important as your subject. If you frame too tight, you lose the story in the shot. If you want to go in tight you can always crop, but try to get the entire story in camera. Park yourself in an interesting place and WAIT. 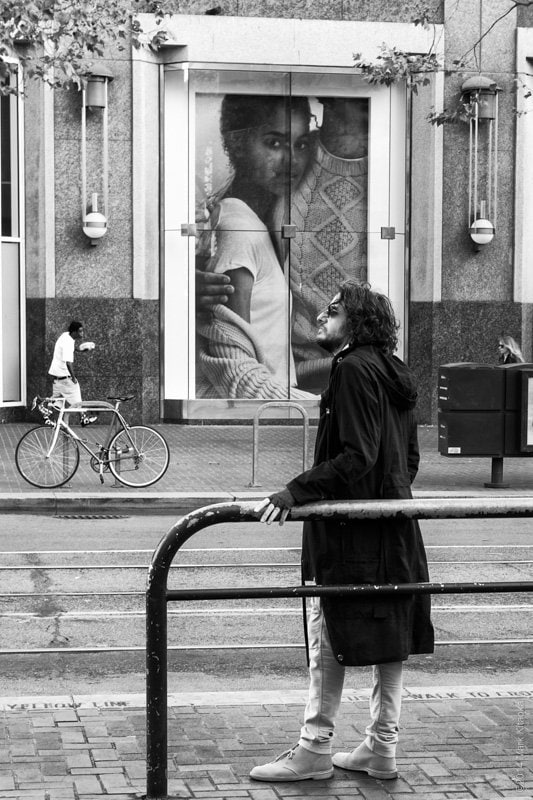 “Suspicious” As I was waiting for a musician I was photographing I decided to hang out on Market Street in San Francisco. I noticed an interesting storefront poster across the street from a bus stop, so I waited there hoping something would happen. I envisioned some sort of interaction between the people in the poster with a real person on the street. After about ten minutes I noticed this interesting man approaching the bus stop, so I simply waited until he got into a position where I could frame him with the art across the street. Light, expression, environment.

2. Observe the light and determine what you hope to achieve before taking a shot. 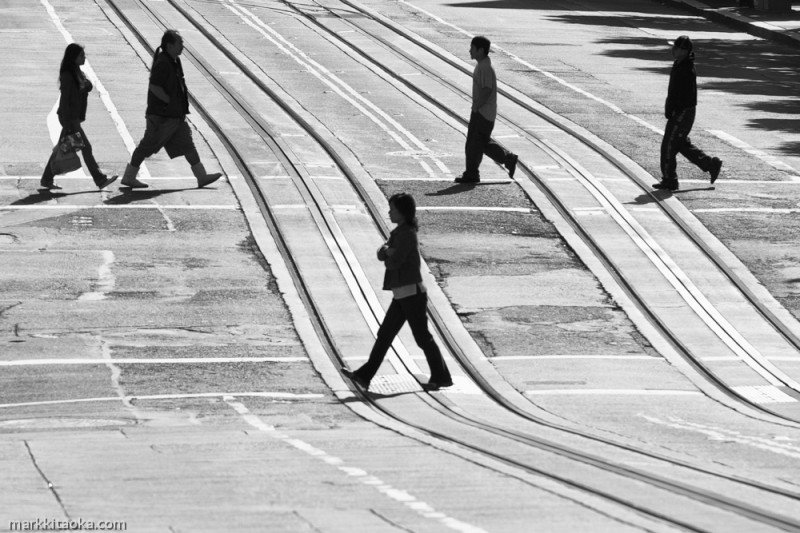 “Intersection” For this image I went into San Francisco one Saturday morning and waited as I watched people crossing California Avenue on Kearny Street. I waited until I observed these five people walking and snapped the image as they were in this formation. It was almost noon so I knew the subjects would be silhouetted, but that was my plan for this shot. Light, expression, environment.

3. Wait for the right action or expression. Remember a great expression with crummy light or a boring environment will not get you the shot you want.

4. Make sure your image tells a story either using light, expressions or the environment. Your best shots will incorporate all three factors. 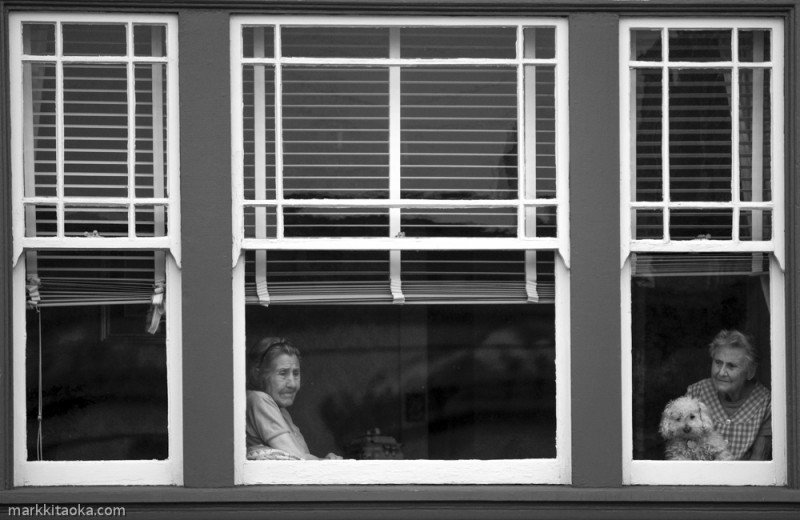 “Trio” Window shots are my favorites and this one was taken during a street fair. I had to wait 15 minutes for the sun to travel to an angle to light the two women and the dog as they watched the people in the fair below their apartment. I was quite worried that this shot would be missed if they moved from the window. But I waited until the sun was just right and took this shot. Light, expression, environment.

5. As in the example below, sometimes you may need to interact with a stranger to get the shot you want. 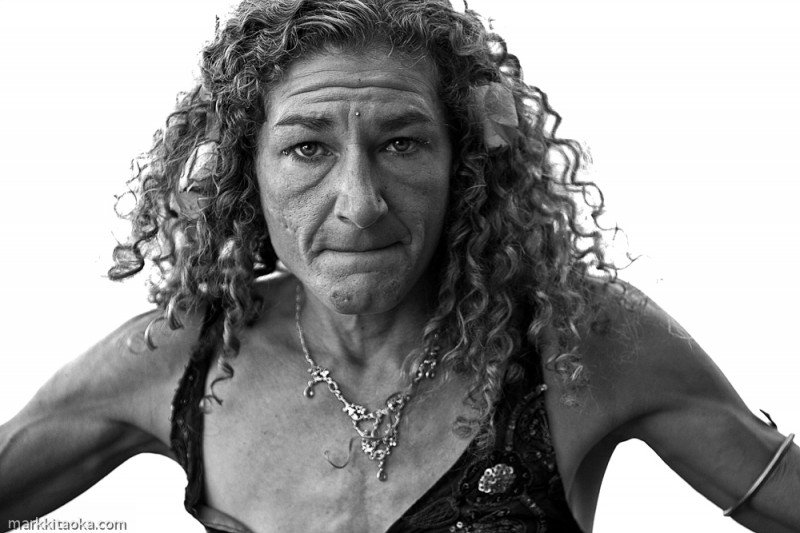 “Hey!” Yes this is a street shot even though it may look like a portrait. This man was out in middle of the street and was focused on using his hula hoop. He immediately caught my attention as he kept spinning round and round next to a white wall. The issue was he kept looking at the ground as he spun while spinning his hoop. So I waited until he came around (he was spinning counter clockwise) and yelled out “Hey!” At that moment he looked up I snapped this shot. After I got the shot, I walked over to him and showed him the shot on the back of my camera. He hugged me and immediately resumed his hula hooping. Light, expression, environment.

“Bliss” I literally HATE any time in the early morning. So getting up before 11:00am takes an Act of Congress or the potential for gorgeous light. In this case the two models in this photo were simply asked to run through a field of grass at around 7:00am amid gorgeous fog. When the light is diffused like this, the whole world seems gorgeous. Because the environment and light are almost a sure thing, your direction to the talent for expression and activity will make or break your shot. Light, expression, environment 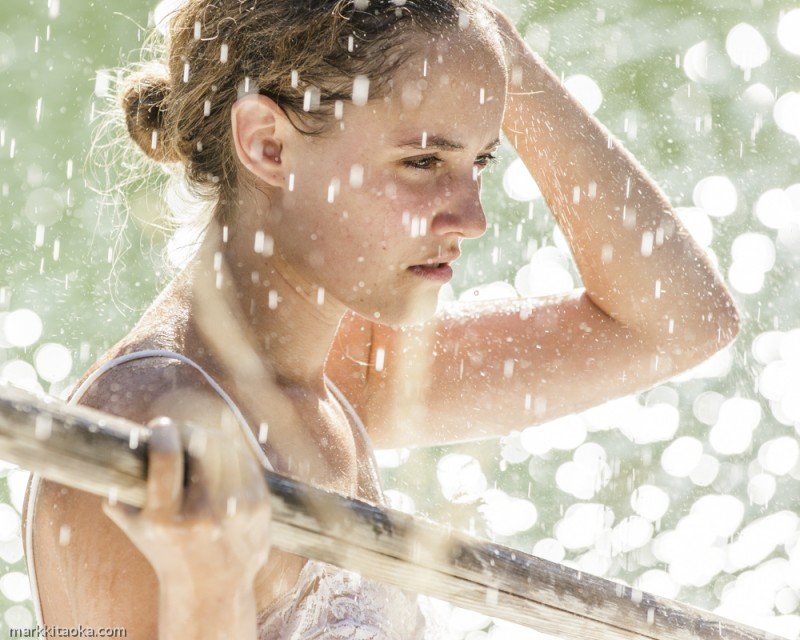 “Enchanted” Bodies of water make incredible reflectors! In this shot I had the talent in a rowboat and asked her to row parallel to the sun. I wanted her backlit to give an angelic feeling to the image. I asked a fellow photographer to spray water from a garden hose into the air and spot metered on her hair (don’t know about spot metering? Read your damn manual!) to give me the exposure I needed for the light. Light, expression, environment

“Fin” My friend Russell was dismantling the recording studio he had operated for over 30 years. He had asked me to photograph the process so he could have memoires of his decades of recording so many artists. I told him that the story would not be complete without taking an environmental portrait of him, so I wandered around his studio to find the right spot. In his upstairs storage room was an old chair surrounded by lots of gear being packed and was lit by window light. Light, expression,environment

All of us get invited to parties and events. Quite a few people think, “Hey, Stan’s got a nice camera, let’s ask him to take some photos.” I see quite a few photographers at events with their flash units on top of their cameras with the latest Fong dong or some other modifier on it. I always chuckle a bit because I’ve always hated how those photos look. They’re mostly the “Everyone say cheese” variety. Instead, go without a flash, use the available light in the venue. Sure it may be horrid, dark or yellow or green, but make do with what you’ve got. Look for authentic expressions and interactions…. Pump up your ISO, take it off Auto and look for a story. Light, expression, environment. 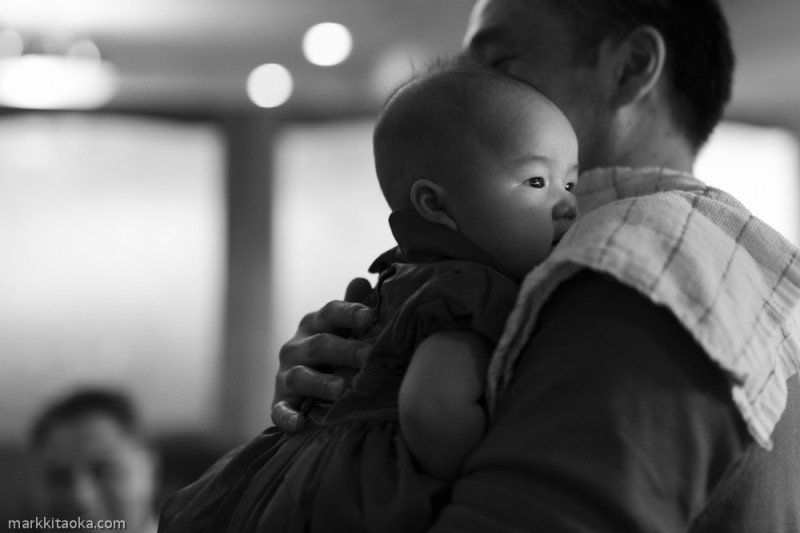 “Wonder” My friend Ken and his wife had a party for their new daughter. And even though they never asked me to photograph the event (all of my close friends respect my time) whenever a close friend invites me to an important event, I try to capture a few images for them. So as I watched him walk around the venue with his pride and joy, I noticed that when he faced his daughter toward the Western windows, this beautiful light would frame her face. So I simply placed myself in a position next to one of the tables so I could capture her awash in beautiful light as she gazed over her father’s shoulder. Some may ask someone to stand in good light and I can understand that method. But my preference is to just let it happen organically. Light, expression, environment.

Reflectors are EXTREMELY effective in directing light where you want it. Remember at the beginning of my article? I used white cardboard to reflect light when I first began. I don’t use them now because I’ve found using a dedicated reflector is better. But it’s up to each individual to choose what he/she wants to use for their purposes. I especially like Sunbounce Mini reflectors. They’re ultra rigid, very light and take about 30 seconds to assemble. They’re especially useful when you don’t have an assistant to hold your reflector.

I use a light stand with one of the Sunbounce knuckles (clamps) to hold the reflector on the stand. If it’s windy I always carry a reusable waterproof shopping bag and fill it with whatever is available. Water/sand/rocks/trash and place it onto the stand to keep it steady.  I carry a roll of paracord with me to lash the bag to my stand. I now use a knuckle and arm to steady my light stands in wind when I don’t have an assistant. If you don’t own a knuckle and arm you can always use a broomstick. Simply place one  end of the stick onto the crossbar of your light stand and place your foot on the other end…instant wind security! You can always carry a sandbag, but I’m just too lazy to do so…. 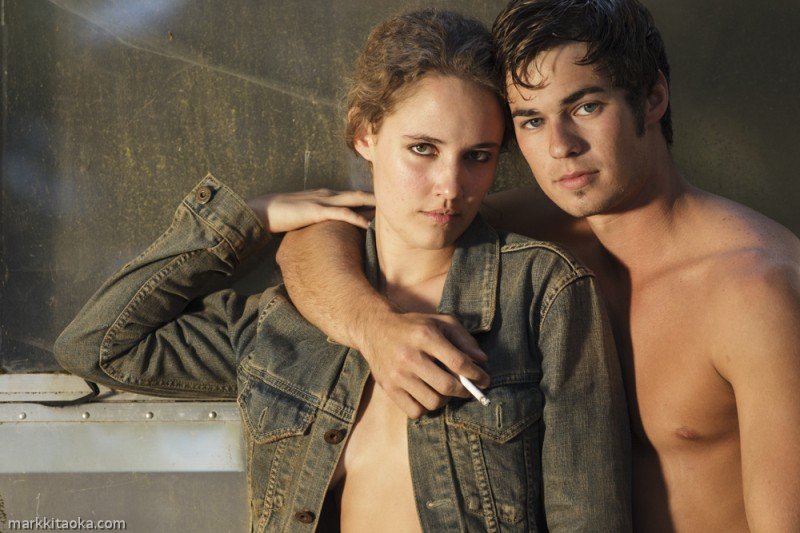 “Yes?” This image of Toree and David was created using two reflectors. There are times when your subjects won’t have a direct line from any sunlight to be reflected onto your talent. So in this case I had one assistant stand in the sun which was directly behind and to camera left of the talent and reflect the sun into another assistant’s reflector who is just camera left of these two. He then took the light that was reflected ‘to’ him and bounced it onto the talent. Think of a billiard shot where you bank the cue ball from one rail to another to get around another ball. Think of this method as a “light relay.” 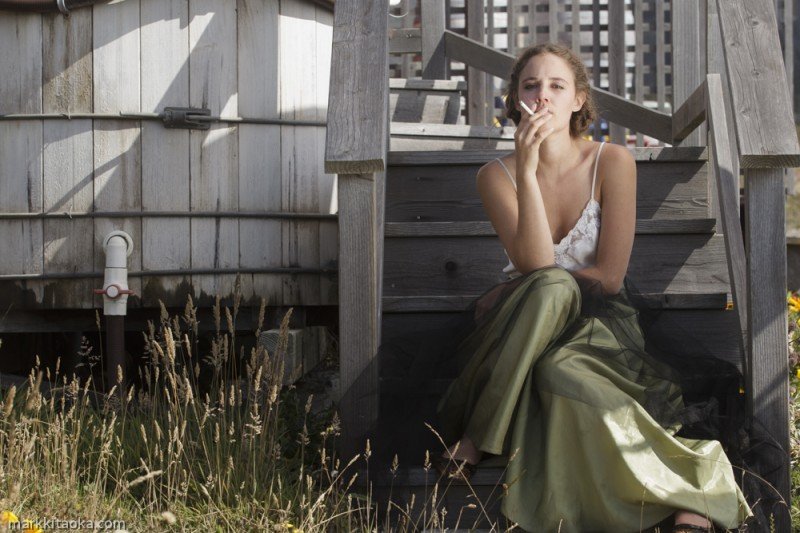 “Intruder” So this image of Toree was created using a 2/3 stop scrim and a reflector. The sun was very harsh and I needed to drop it down to soften the light. Using a Sunbounce Sunswatter overhead and then a Sunbounce Mini silver reflector to fill her in accomplished the light I wanted.

Don’t have a scrim? Use a white bed sheet or a piece of fiberglass screen door mesh. My point here is you can use any number of materials to reduce or reflect sun. More expensive methods won’t make your images better, they will just make your task more convenient.

My must have items in your bag:

Must have items in your head:

And my final piece of advice: Get off gear forums and use that time to study light and practice patience. You’ll be amazed at what that ten year old camera can create with knowledge and imagination behind the lens. Happy shooting.