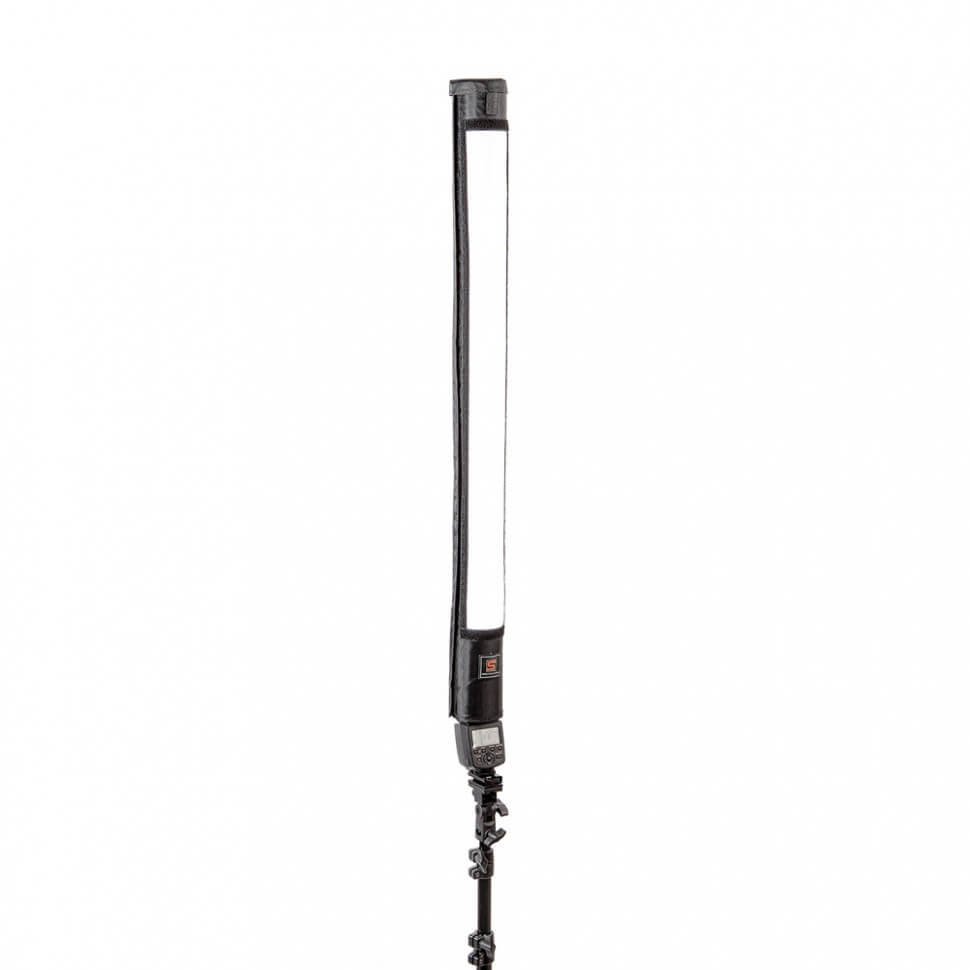 For any of you who follow my blog it should be very apparent how impressed I have been with the Saberstrip v2.0 which uses the Godox/Flashpoint 200ws strobe instead of a speed light like their SS v1.0. A few years ago I was very fortunate to test their new prototype and gave them some feedback about the unit. It was very minor and I anxiously awaited the final release. And waited, and waited, and….well you get the picture.

I used the v2.0s during many different sessions, but I found they worked so well for my studio dance imagery they became my defacto lights for dance. You can read about my impressions and experiences in my post about the Saberstrip v2.0. 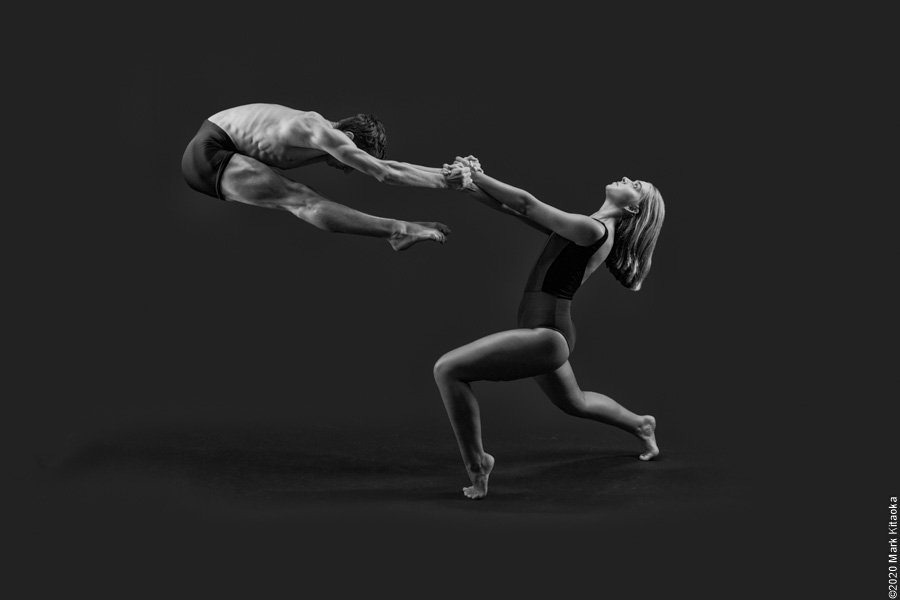 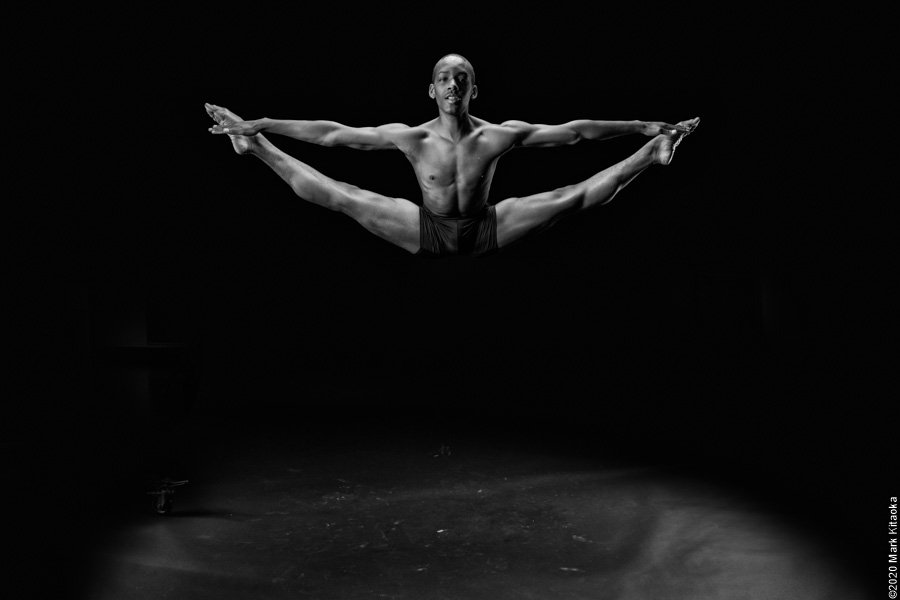 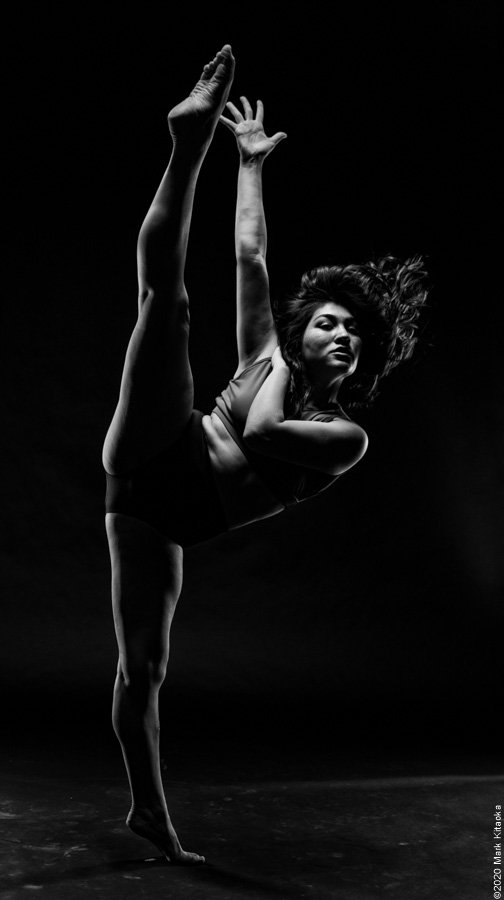 Recently a visitor to my site made me aware of a similar light modifier by Strobius, their StrobiStrip 100. I also found another modifier the FOTOCREAT 3″×20″(8×50cm) Strip Flash Diffuser Softbox on Amazon. So I purchased one of each to see how they compared to the SSv2.0. Both of those units are designed to be used with speed lights, but since the 200 is close in shape and size to the end of a speed light I figured they’d fit the 200. And they do indeed.

Both the Strobistrip and the Fotocreat are very similar in materials and design. Both use a rip stop translucent fabric as diffusion material, ballistic nylon for the body and silver fabric to reflect light on the interiors. Velcro attaches the tube together as well. The Strobistrip differs as it uses a semi rigid piece of clear plastic to keep the shape of the tube consistent and I imagine more evenly reflects light throughout the tube. Because it breaks down it’s a very clever design.

I’m a firm believer that you never get something for nothing. The SSv2.0 is a remarkable modifier but it is bulky to carry since it is a solid tube. The other two are much smaller when packed down. About the size of a man’s travel bag for his toothbrush, shaving kit, etc. So trading portability for size, I assumed that the light output would not be the same. So I tested all of them. 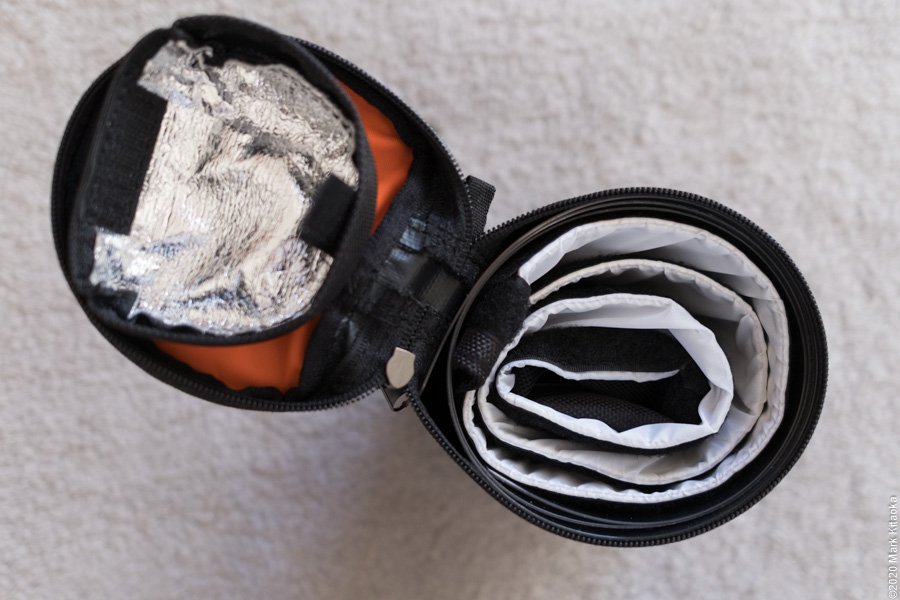 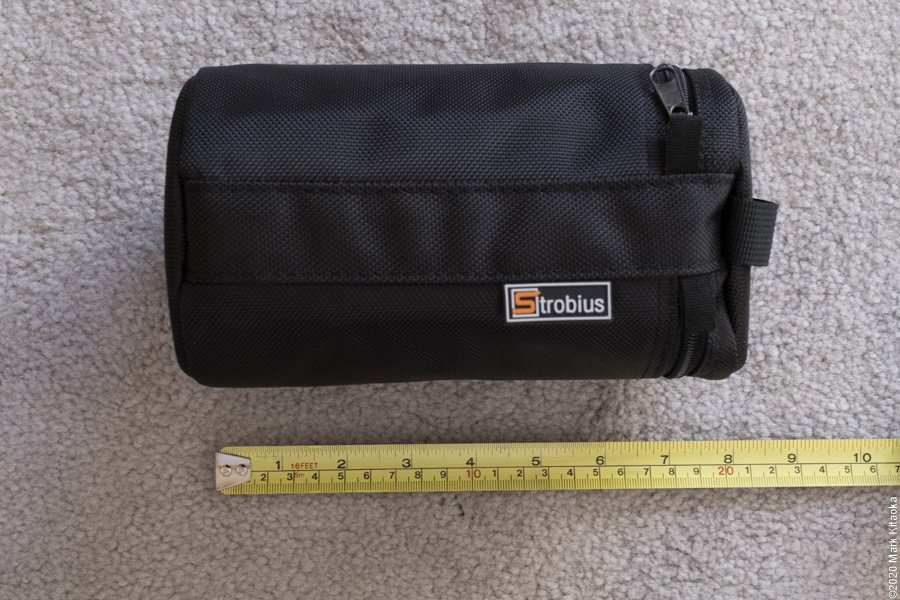 My Testing Chart of all three Modifiers 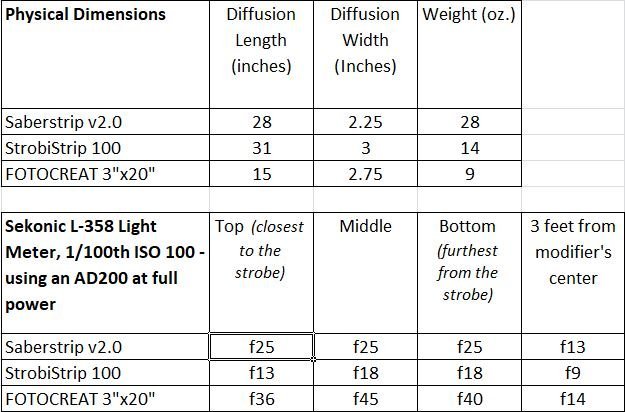 As you can see the SSv2.0 has the most consistent and efficient use of the light. The StrobiStrip 100 was less consistent and efficient than the SSv2.0. The FOTOCREAT was all over the place in terms of its light output along the length of the tube. I returned the FOTOCREAT as it is too small for my work and the inconsistent light output along its length made it unattractive for my taste.

In examining the interior of the SSv2.0 he follows the same design as his v1.0 unit. A very cleverly placed piece of ramped reflecting material at the opposite end of the strobe’s socket must increase the light furthest from the source to make it so even.

I also feel that the StrobiStrip’s use of clear plastic to help hold the tube’s shape also adds to the interior’s reflective value helps with its light efficiency and consistency.

One of the most ingenuous design elements of the SSv2.0 is how it mounts the AD200 to the tube. He has developed what I refer to as the ‘tractor tire’ with a 3/8” peg that will fit into any standard light stand socket. The tube rotates around the tractor tire giving me the ability to easily adjust the direction of the diffusion fabric. I’m not talking about your normal x/y adjustment, but the z axis without disturbing the other two axis’s. 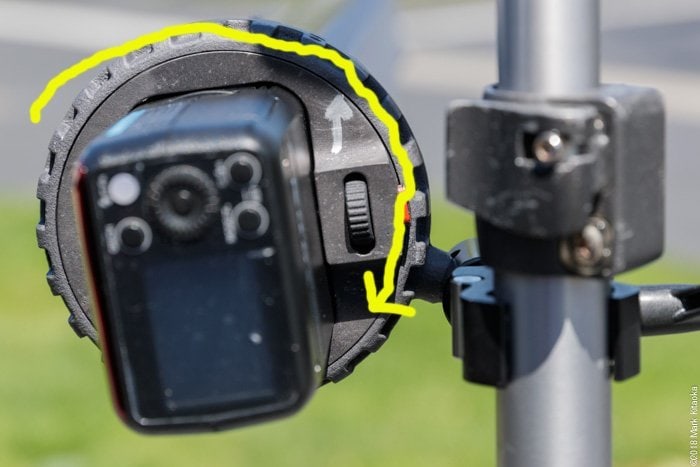 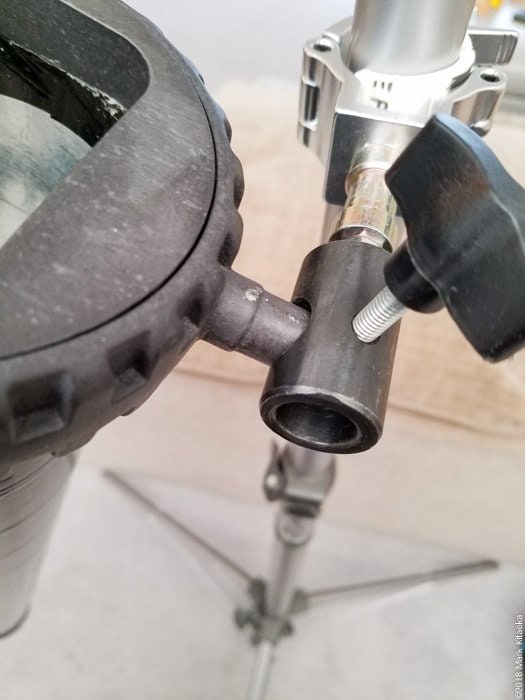 I have come to depend on that wonderful design feature. So when I tried to use the Flashpoint eVOLV 200 Round Flash Head attachment on my eVOLV 200 with the StrobiStrip in hopes that it would allow it to smoothly rotate around the strobe I was thrilled! There is enough Velcro to still securely attach the modifier to the strobe, but with the round head, it allows a smooth rotation around the strobe! The OEM Fresnel head does work as well, but the round head is much better to use in rotating the modifier. 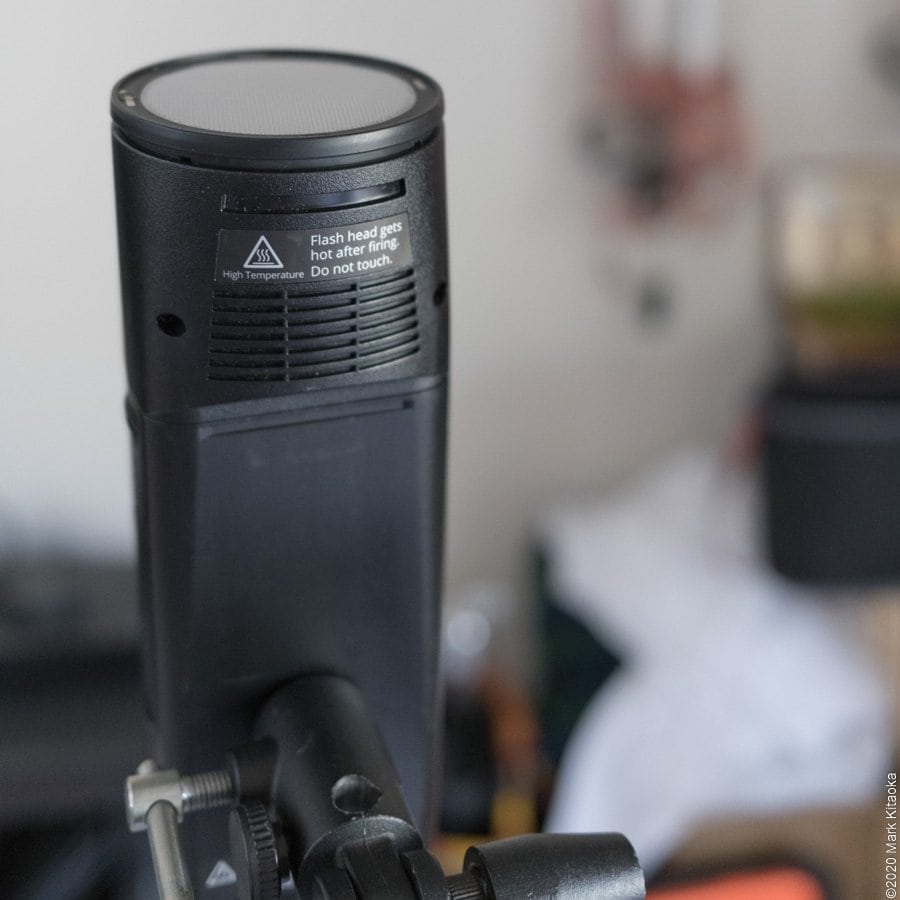 In the following two images you can see that I can rotate the modifier around the strobe which is one of the features of the SSv2.0 I fell in love with. 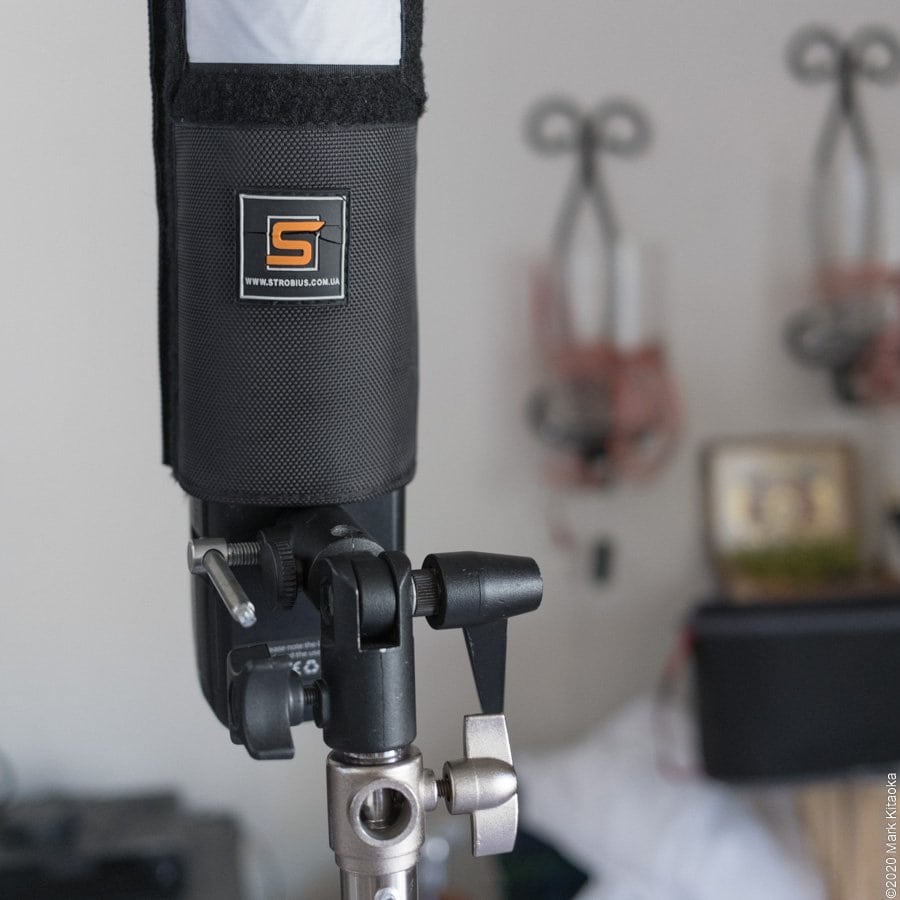 I wanted to determine if the StrobiStrip 100 holds up to high wind as well as my SSv2.0s. Yep they do just fine. The modifier is around 5-11 up in the air on a light stand.

I will keep an eye on the StrobiStrip fabric which is wrinkled when assembled. I doubt it will pose issues in the quality of light. If so I will report back here. 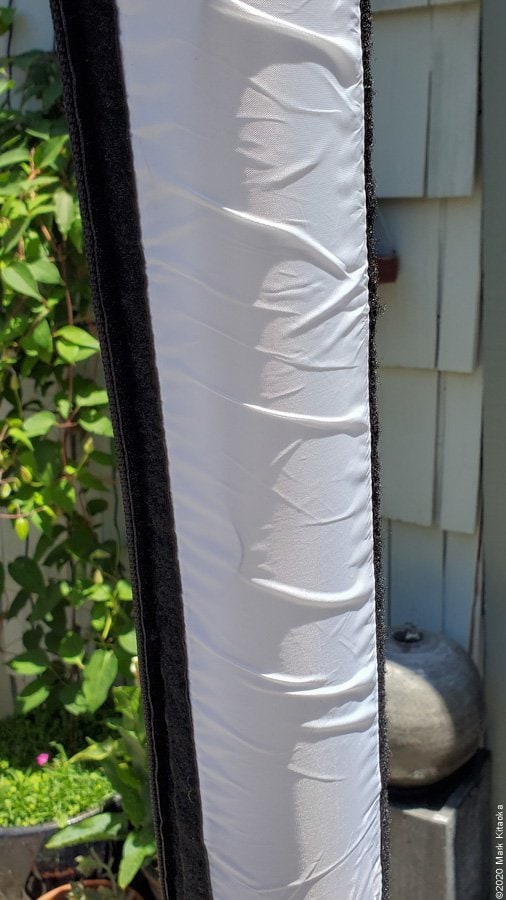 I have used my SSv2.0s so much that one of the tubes has started to split, so I just used gaff tape to repair it. The other one’s diffusion fabric started to fray so I used some superglue on it. IF Saberstrip ever decides to manufacture them I will be first in line. But until or IF they do and I need more tube modifiers I’m glad to have been made aware of the StrobiStrip 100s. I keep mine built and will break them down once COVID19 is over and I have to travel for work again.

If you want to try tube modifiers with an AD200 they are the ones I recommend.