Interview with Paul Freeman for my exhibit “29 Hands – 15 Artists” at the Peninsula Museum of Art. Exhibit runs from May 18 through July 20 2014. 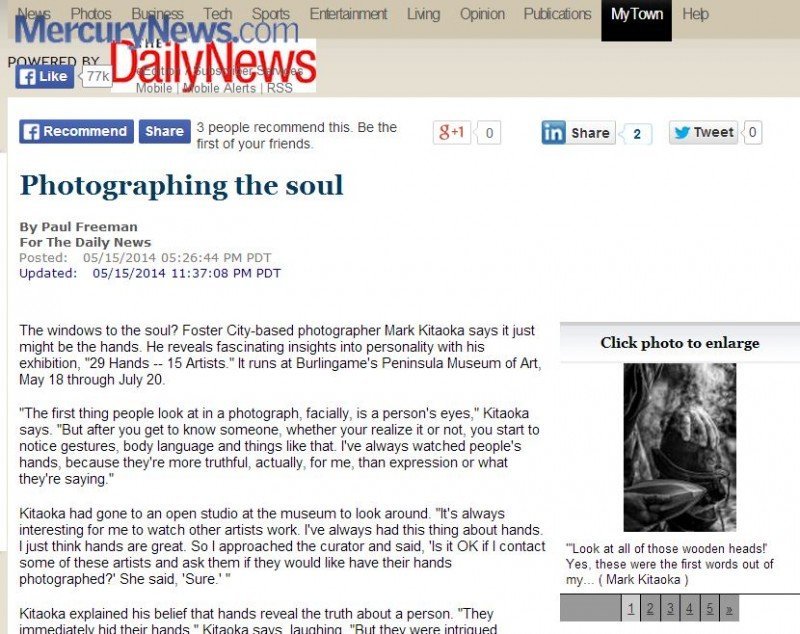 For The Daily News

The windows to the soul? Foster City-based photographer Mark Kitaoka says it just might be the hands. He reveals fascinating insights into personality with his exhibition, “29 Hands — 15 Artists.” It runs at Burlingame’s Peninsula Museum of Art, May 18 through July 20.

“The first thing people look at in a photograph, facially, is a person’s eyes,” Kitaoka says. “But after you get to know someone, whether your realize it or not, you start to notice gestures, body language and things like that. I’ve always watched people’s hands, because they’re more truthful, actually, for me, than expression or what they’re saying.”

Kitaoka had gone to an open studio at the museum to look around. “It’s always interesting for me to watch other artists work. I’ve always had this thing about hands. I just think hands are great. So I approached the curator and said, ‘Is it OK if I contact some of these artists and ask them if they would like have their hands photographed?’ She said, ‘Sure.’ ”

Kitaoka explained his belief that hands reveal the truth about a person. “They immediately hid their hands,” Kitaoka says, laughing. “But they were intrigued.

“So the majority of them were very enthusiastic about it. I just went to their studios and set up my little lights and started shooting a couple of them, and after a few of them saw the images, then all of them wanted to do it.”

He photographed them while they worked. Included in the subjects are a singer, painter, sculptor, choreographer, lighting designer, stage actor, cellist, poet and TheatreWorks artistic director Robert Kelley. Kitaoka found a connective thread.

“Everyone, whether they realize it or not, greatly expresses their art through their hands. And as I started going through this project, all of them became more cognizant of how much they use their hands. All of us, whether we’re artists or not, express ourselves a lot through our hands.”

This began as simply a personal project. “When you’re a commercial photographer, I believe you should always have personal projects,” Kitaoka says, “because you art-direct those yourself, and it certainly keeps me sharp and keeps my interest in photography high. When you do your own work, you can do whatever you want.”

The curator approached him about presenting it as an exhibit. At first, Kitaoka said no, saying he’d always viewed exhibits as a bit narcissistic. One of the final subjects he shot, mixed media artist Werner Glinka, changed Kitaoka’s mind.

“He said, ‘Why do you go to galleries, Mark? For inspiration, right?’ I said, ‘Yeah.’ He said, ‘Well, then you should quit being selfish. Why wouldn’t you let other people be inspired by what you do?’

“I always have an answer for everything. This time, I had nothing,” Kitaoka says, laughing.

Fifteen artists, 29 hands? How does that math work? One of the artists depicted, a resilient local poet, lost a hand in his days as an overworked butcher. Knowing his subject’s backstory is important to Kitaoka.

“One of the things I love about photography, being in the commercial world, is you’re not so isolated, like fine art or landscape photographers, people that kind of do it all by themselves. I like people, so I like to get to know them.”

Getting to know people was what initially drew Kitaoka to photography, as he grew up in Anaheim. He and his friend were the only Asian-Americans in their high school.

“Pretty much we were invisible,” Kitaoka says, laughing. “I could never get a date. I started taking portraits of people and I discovered early on — women love to have their picture taken. I had a little darkroom. And I quickly realized that I loved photography.”

Kitaoka went to work for Mervyn’s stores and he was asked to relocate to the corporate offices in the Bay Area. “I thought, the Bay Area, I don’t want to move there, it’s so artsy-fartsy!'”

However, two things immediately appealed to Kitaoka, when he made the move. “There was no smog … and tap water tastes like bottled water.”

Soon he had fallen in love with the area. “I’ve been up here 38 years now, and I’d never go back. I love the people here. I love the water. And I love the arts,” Kitaoka says with a laugh.

When his children were in high school, Kitaoka bought a digital camera, to document his daughter’s involvement in theater. (His daughter is now 26 and his son is 23.) His passion for photography was rekindled.

In 2007, he went to see a performance of “Forever Tango” at San Francisco’s Post Street Theatre. He was so taken by the movement, he asked if he could return and take photos. A publicist asked how much he would charge to use one of the photographs.

“I had no idea how much to charge. I came up with a number. She accepted it right away and I thought, ‘Oh, I should have asked for more,'” Kitaoka says, chuckling.

Working with low light and rapid movement is challenging. “I really think, for dance photography, you either have the ability to time it right or you don’t. I don’t think it’s something you can learn. I think it’s innate.”

Following that first paying gig, Kitaoka found himself much in demand. He photographed “Grey Gardens” at TheatreWorks, and subsequently became the company’s performance photographer.

His theater resume now includes many companies, including Broadway By The Bay, San Jose Repertory and War Memorial Opera House.

His ongoing work at Hillbarn Theatre is greatly valued. That Foster City company’s marketing and operations director, Daniel Demers, says, “Mark Kitaoka is one of the most brilliant artists I have ever met. Mark is one of those selfless people who will do anything to help you achieve the shot, mood, and feel you want out of every photo. He’s lighthearted, fun and an amazingly soulful person. The growth of Hillbarn Theatre could not have happened without the vision and talent of Mark. He is always there to help craft the perfect look for our shows, and allows me to play outside of the box with him. I cannot wait to see what we can accomplish together for the future of Hillbarn.”

In 2011, when he was laid off from his Sony corporate job, Kitaoka viewed it as an opportunity to pursue his passion full time. He has already carved out a sterling reputation as a commercial publicity and production performance photographer.

His work has been seen in ad campaigns and in such publications as Huffington Post, Parade Magazine and American Theatre Magazine.

Kitaoka has shot such luminaries as Joan Baez and Kathie Lee Gifford, as well as symphony conductors and Tony Award-winning composers, directors, actors, producers and playwrights. He views his subjects as collaborators in the process.

“If you don’t like people, if you can’t engage people, don’t expect to be a good people-shooter. You have to establish some rapport, some connection. And a lot of the people I’ve shot have become friends.”

Capturing those in the performing arts has become Kitaoka’s specialty. “One of the things I absolutely love is the fact that it’s a community. Also, no one gets into performing arts to make money. If they do, they’re crazy. They get into it for the love of the art and to express themselves.”

Kitaoka, 59, is brimming with creative self-expression. “My girlfriend, who’s also my business partner (photographer Tracy Martin) says she has to reel me in, because I’m always bursting with ideas.”

Once he has taken a photograph, Kitaoka rarely looks at the shot again. “I always think that my next picture will be my best. I’m never at a loss for inspiration.”