I utilized the Grand Para in combination with other modifiers for a publicity session. You can view that blog post here.

I have been remiss in updating my findings utilizing this remarkable modifier. Most of the imagery I cannot share right now, but do have one which can be shown. This particular image is one of the publicity shots for Momma Mia. I used it pointed directly at the talent about 7 feet in the air. Two Saberstrips were also used, one camera left to illuminate the talent’s face as she was in complete profile looking up as she lifted the microphone to her face. 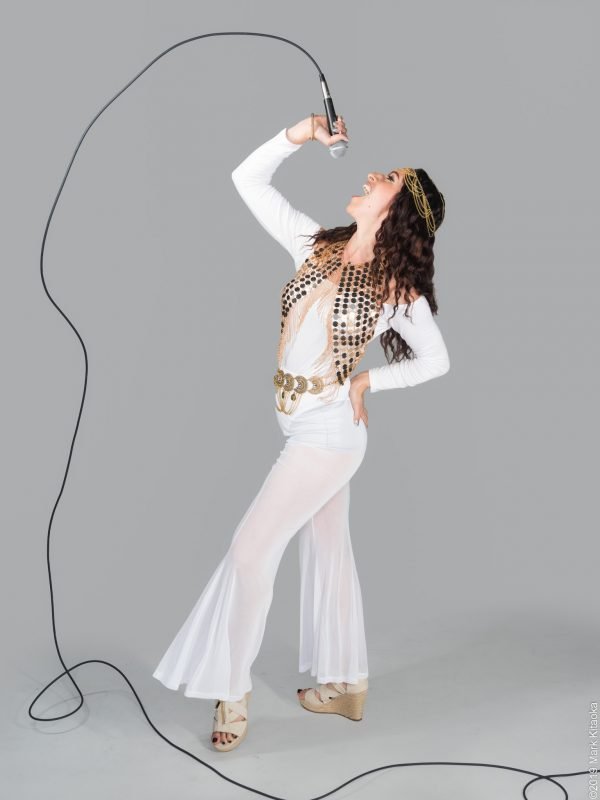 These images illustrate how the lighting was generally arranged. 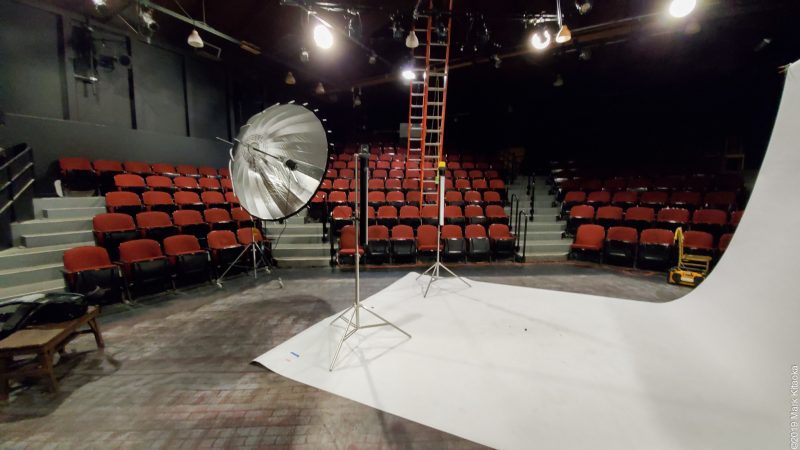 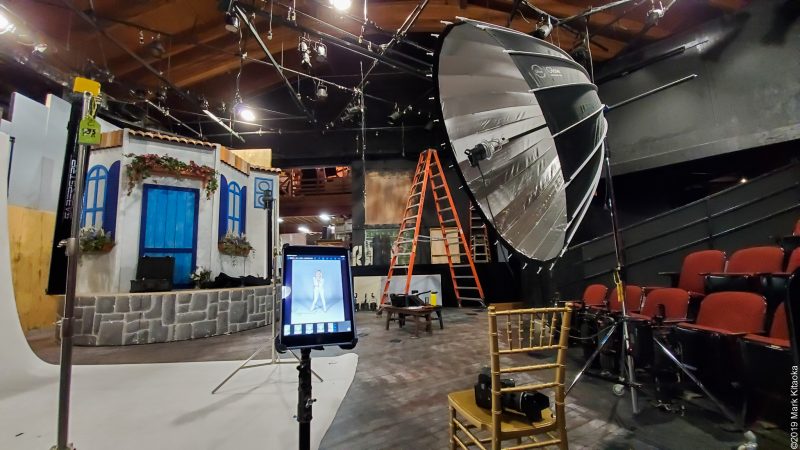 I have an upcoming publicity session so it was important for me to test the Grand prior to deciding on using it for this project. I asked Sammi, a local actress to be my model for the shoot. I have decided to not use any other lights or modifiers when I test new gear to see how they stand on their own. I normally shoot with at least three lights and modifiers during a session. In this case I only used the Grand 70 using a Flashpoint 600 with the remote head. I did not use the Grand with anything other than the focusing arm, no diffusion panels at all. Here are my observations: 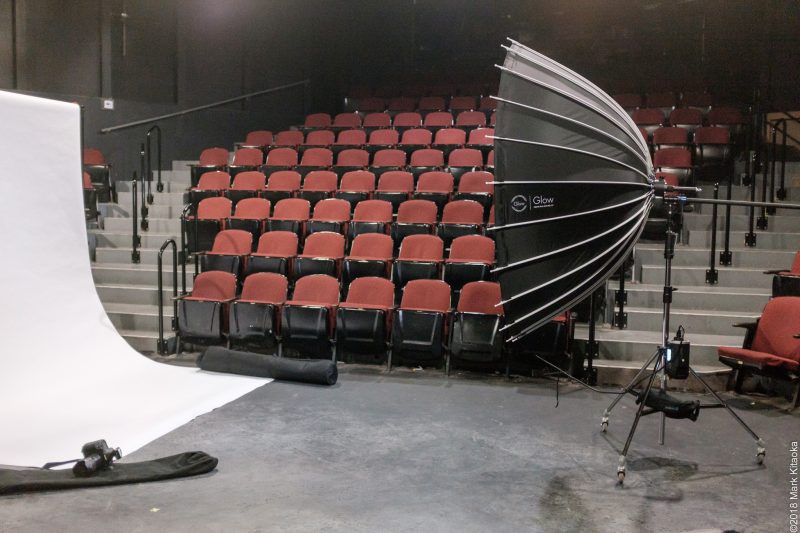 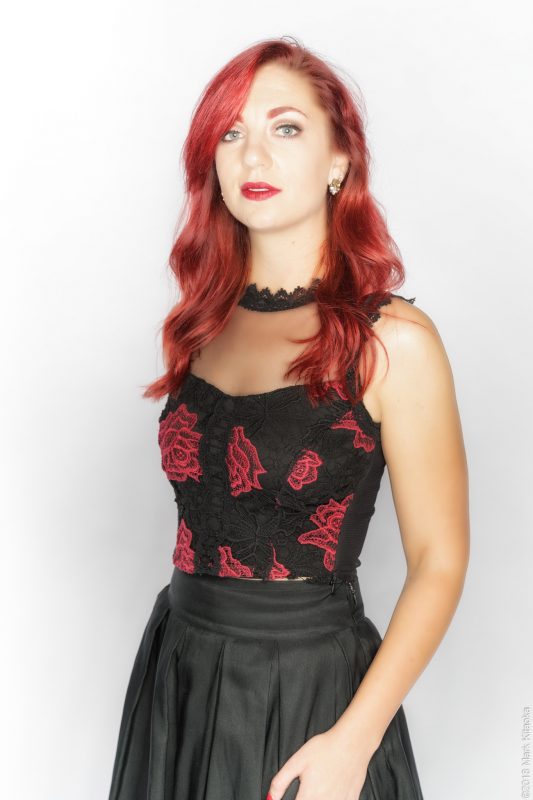 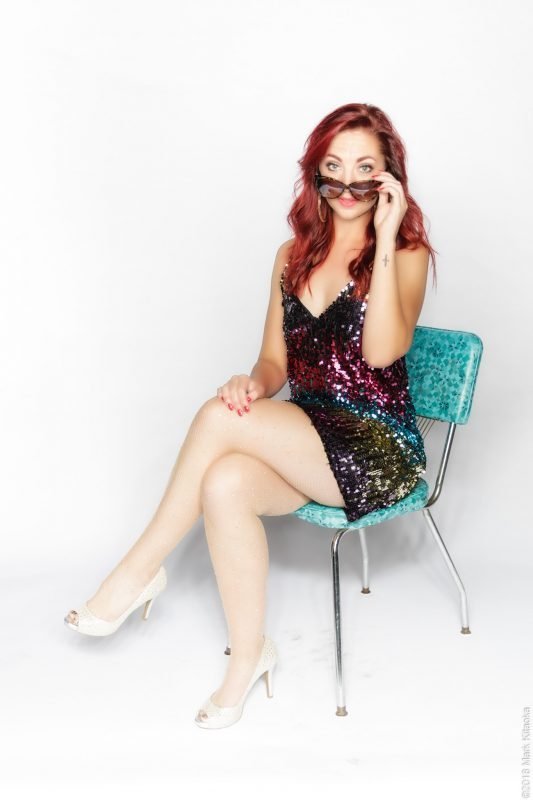 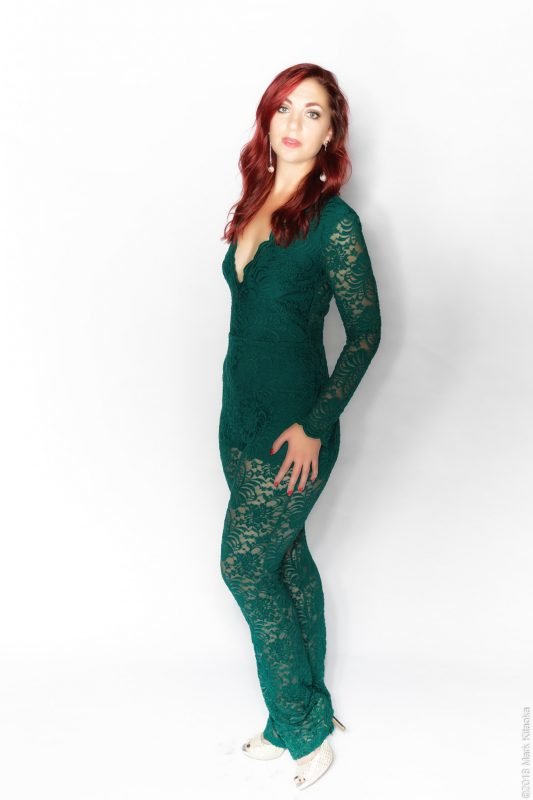 In the image below you can see in her eyes the light pattern which I had fully flooded to create a ring light affect. I’m standing directly in front of the modifier. 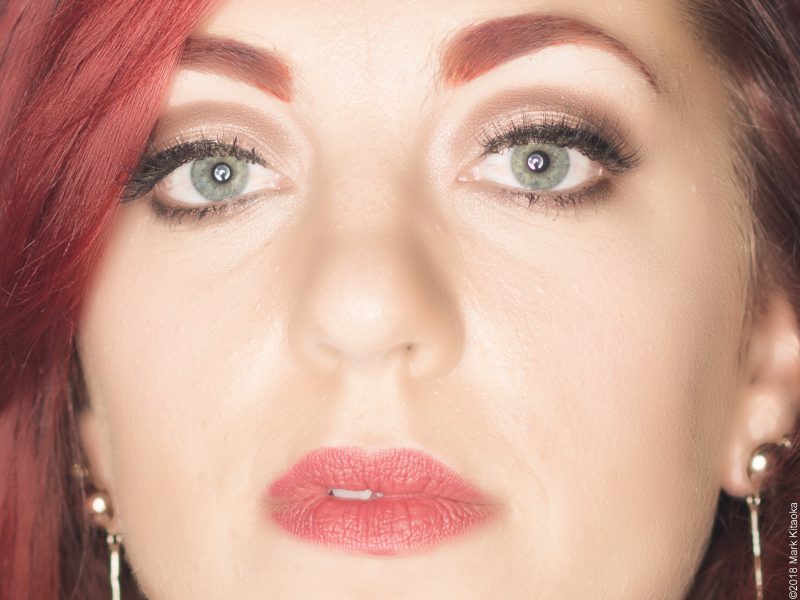 My next test was to move away from seamless to see just how angling the modifier can create a completely different look. 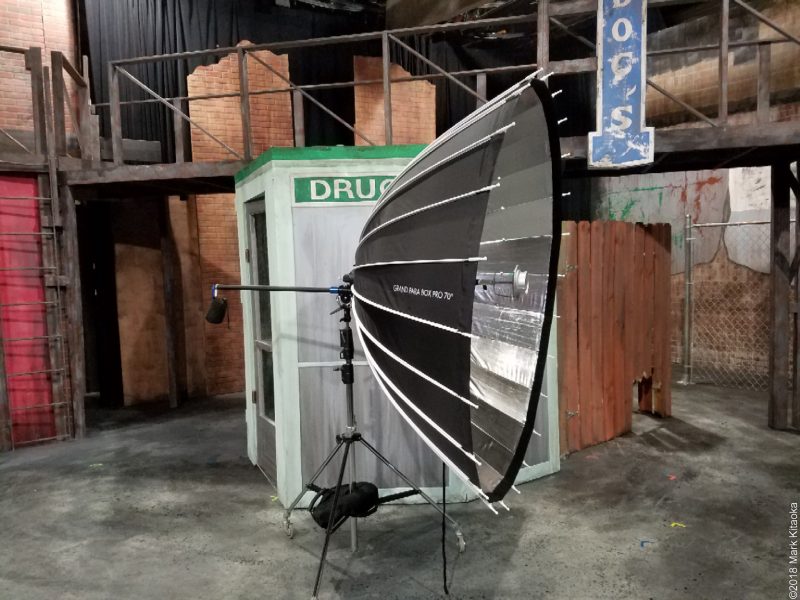 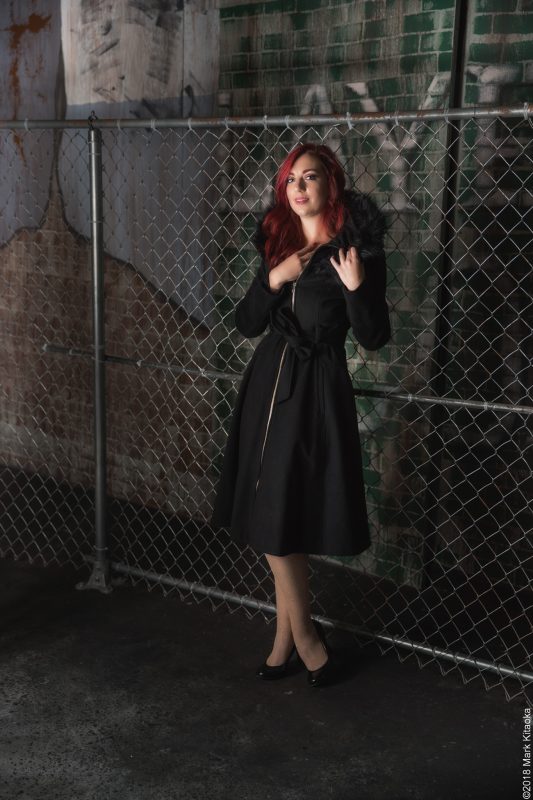 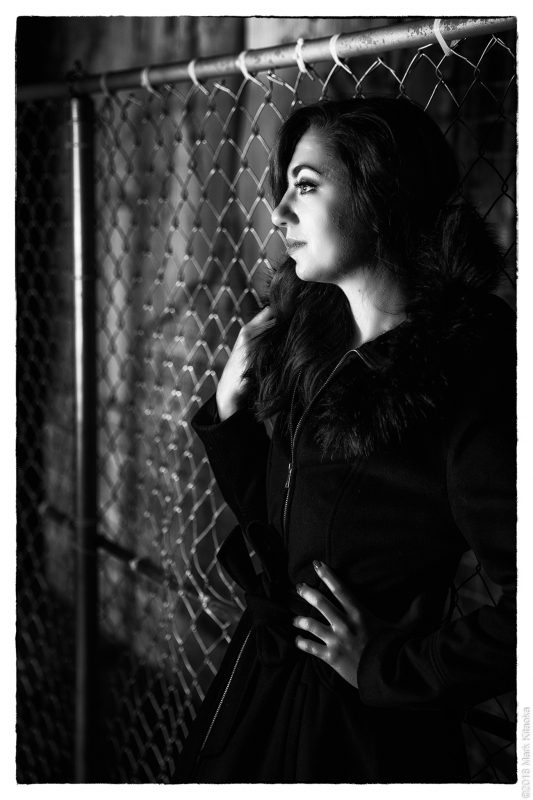 In both of the instances above the light was feathered to one side of the Grand in order to give dimension to the shot. Both were shot with the light in mid focused position to add contrast and drama.

I will continue to try other methods with this Grand that I was never able to do when I rented the Bron Para line of modifiers due to time constraints. At this point I will simply say that the Glow Grand Para line, at least this 70, truly competes with the Para 177 at a third of the cost. I find the light quality as good for glamour imagery and am thrilled that Adorama has started to carry a line of modifiers like this. I recently purchased and am awaiting the remote head for the 600Pro which I am anxious to try with this Grand. I also plan to use the outer diffusion panel with the focusing rod to experiment with the light characteristics with that combination. Stay tuned, but for now I highly recommend the Grand line if you are looking for a viable alternative to the Bron Para line of modifiers.

In just over a week I will be testing this modifier on actual talent. I am anticipating a very good result. So much so that I had a client meeting this morning for an upcoming publicity shoot on location in front of a grand staircase at a Fairmont Hotel. Because I anticipate using the Grand Para 70 for that shoot I had to determine if it would fit into my SKB hard sided golf bag! IT JUST FITS thank gawd! LOL

My trusty SKB golf bag. I use this for all of my away games! 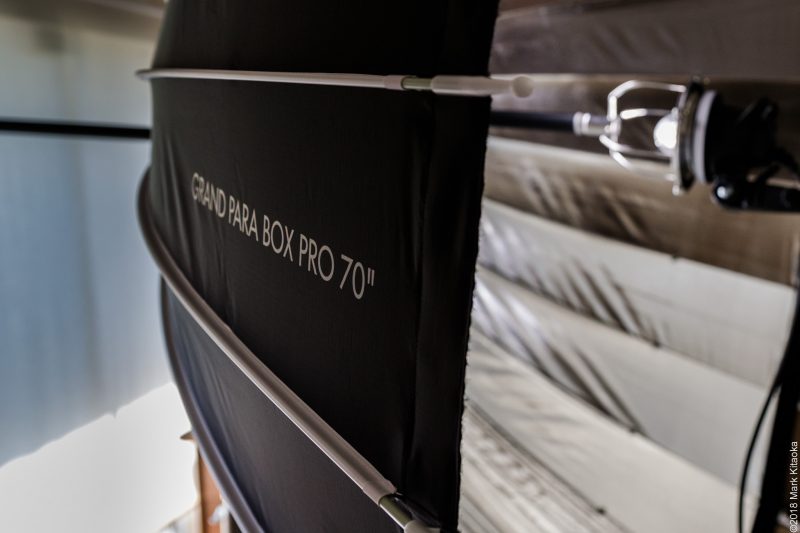 These are my initial impressions of the Glow Grand 70 and the Zoom-In Bounce Rod. I won’t be able to test the modifier on talent until early September. So for right now I will go over some of the facets of the  modifier and bounce rod, AKA focusing rod. It’s the first 24 rod octa I’ve owned, although not the first I’ve used. The Broncolor 177 ($4300 USD) is the closest in size to the Grand 70” ($1150 USD plus $490 for Bounce Rod = $1640 USD). The Bron Para 177 and the Grand 70 both measure 70” across their face . Both utilize 24 rods in this configuration. The Grand 70 comes with a choice of strobe mounts; mine arrived with a Bowens ring although I won’t ever use it without the Glow Grand ParaBox Zoom-In Bounce Rod.

The assembly of this octa is very different than any other modifiers I have owned or rented. The new configuration consists of 24 levers that are spring loaded which must be ‘locked’ into adjoining bars on the modifier. 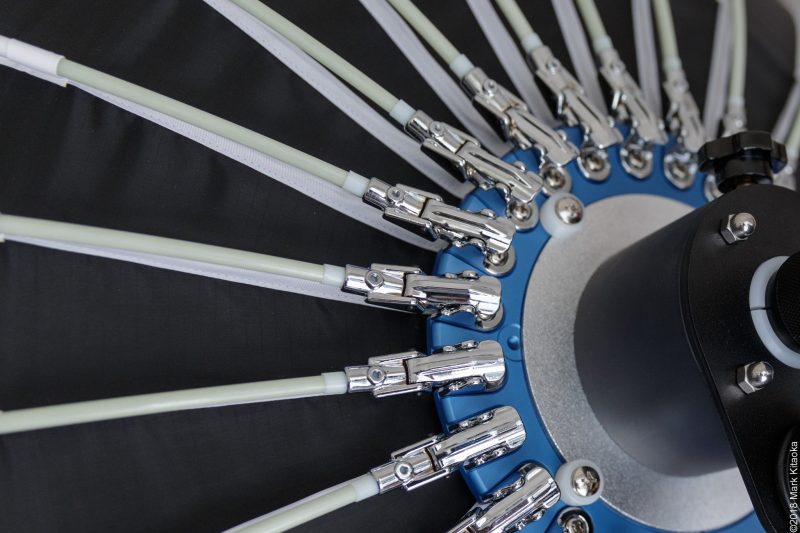 This is where I encountered the most difficult part of assembling the Grand Para. In order to put enough tension on each individual arm, I needed to stretch each arm out from the center of the modifier. Doing so alone without assistance, I found that I could not create enough leverage to push each rod away from the center of the modifier to get the lever to ‘click’ into its corresponding bar. This may be easier with the smaller modifiers. Right now this is one of the primary differences between the Bron Para 177 and the Glow Grand 70. The Bron’s rods are hinged in the middle and must be extended before using a crank to expand the modifier. Much easier to do and keeps the fabric taut. Because they’re hinged the Bron’s collapsed length is shorter than the Grand, but its collapsed diameter is larger. The Grand’s interior fabric is very similar if not the same as the Bron; a very shiny silver and very tight as well. The Bron’s outer fabric is thicker than the Grand, but I believe both are very durable.

This is the interior reflective fabric of the Grand. The eyelet is for the supplied inner diffusion material. 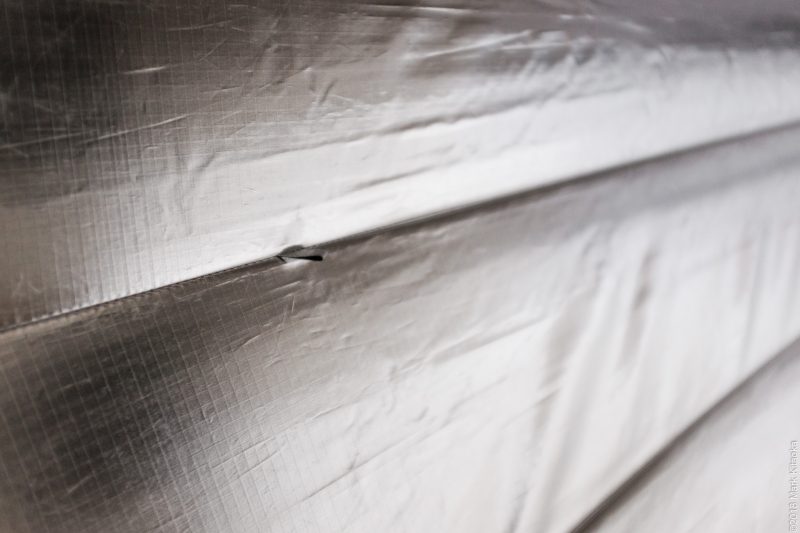 A close up view illustrates how each rod ‘snaps’ into place using a hooked tab which engages a bar on the latch. 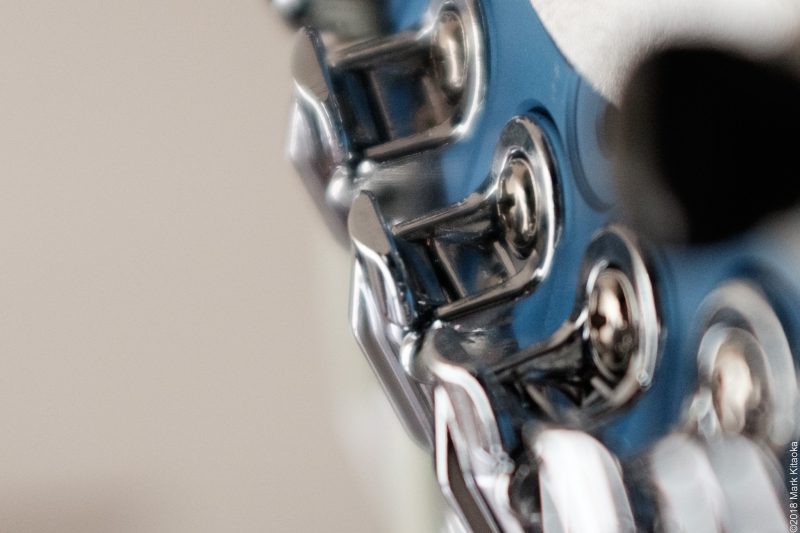 In order to gain enough leverage to bend each rod to engage the bar, I found it best to use the Bounce Rod for leverage. I GENTLY pulled the rod toward me and then the rods would easily snap into place. The rods are fiberglass so they won’t permanently ‘bend’, but using caution is always the best practice when stressing any modifier rod be they fiberglass or a metal material. 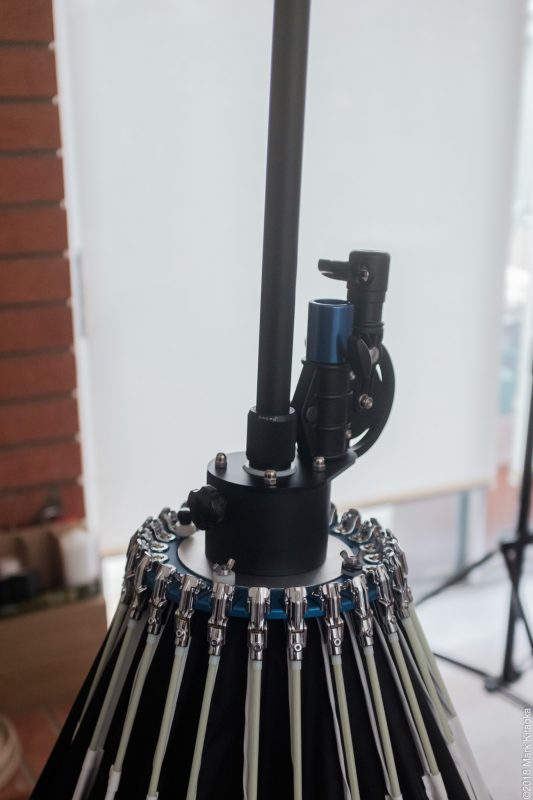 The octa itself is very well made and much lighter than I expected. It has a ‘pass through’ slot which I had hoped would fit/accept my Flashpoint Portable 600ws Extension FlashHead. But unfortunately the opening is not large enough to allow the Extension socket to pass through. No matter since the cord is more than long enough to allow it to come through the front of the modifier to easily reach the strobe body. 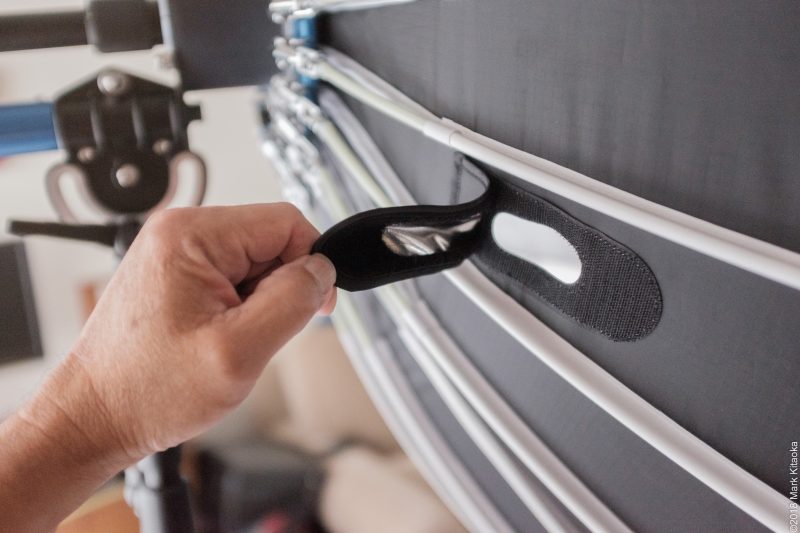 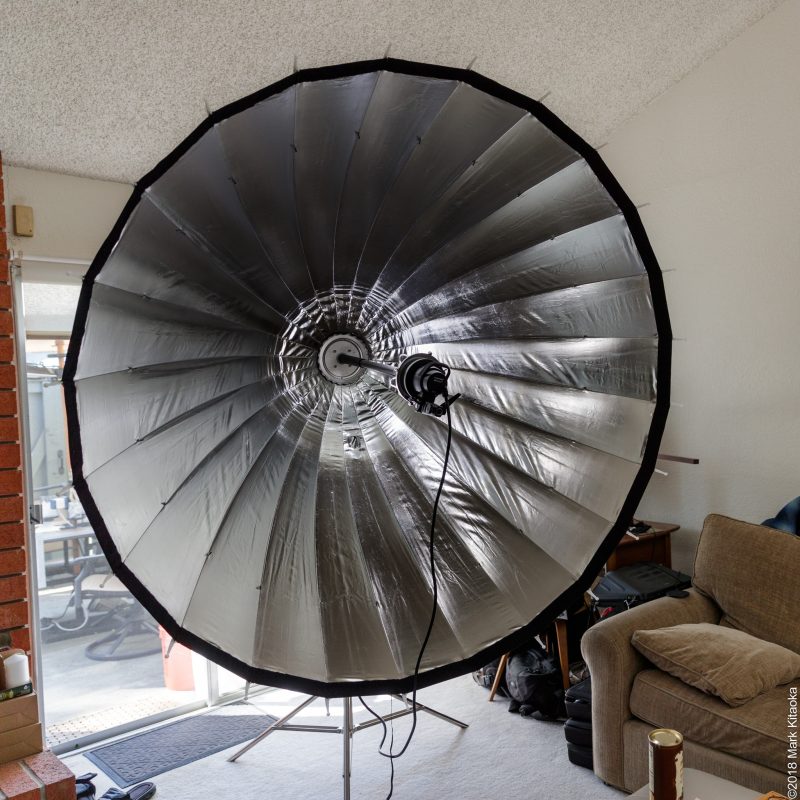 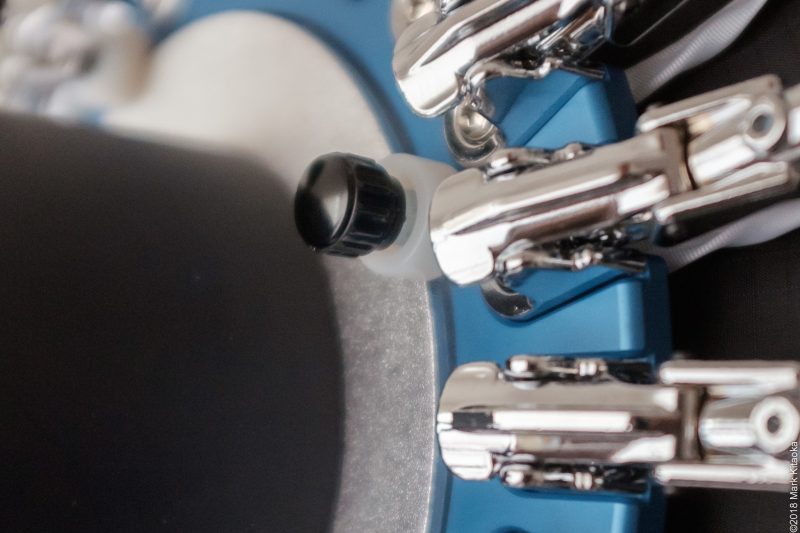 The Grand Para will not fit into its supplied case with the bounce rod bracket attached. It WILL fit into the case by detaching the bracket, inverting it and inserting it into the ring hole which reduces its length to fit into the bag. The modifier comes supplied with an inner and outer diffusion panels (not shown) as well as a speed ring for your strobe connector of choice. Mine came with a Bowens mount (not shown). I doubt I’ll ever use it as a traditional octa bank. I prefer the look/flexibility of focusing arms. Adorama also supplies an empty sand bag (not shown) that can be used as a counterweight on either the Bounce Rod focusing arm or the leverage arm.

The focusing arm has an eyelet on the end for the sand bag. 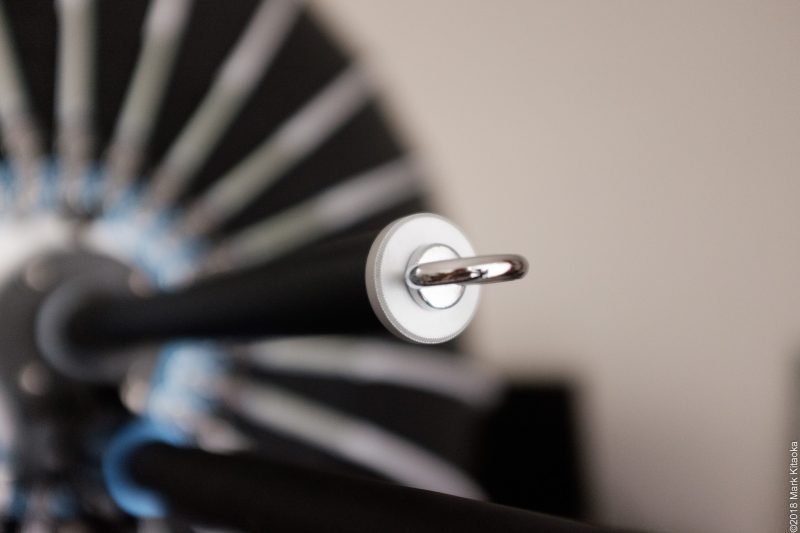 The leverage arm also has an eyelet for the sand bag. 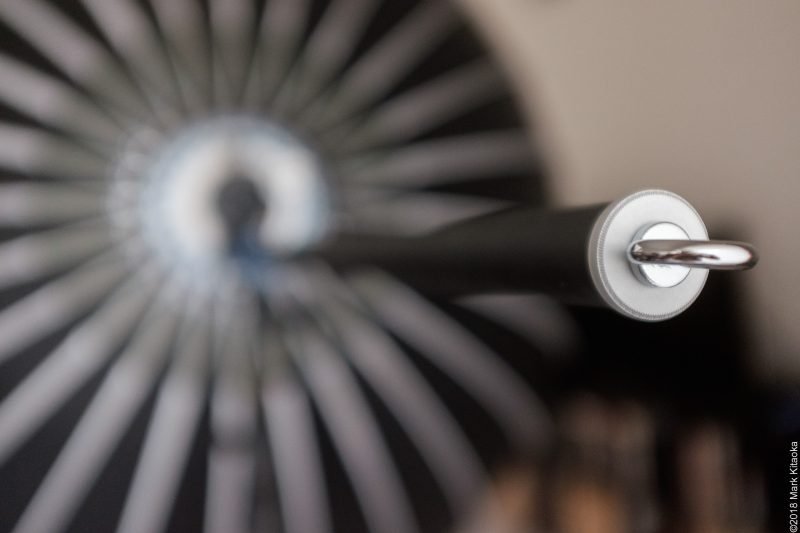 I did not find a need to use the sandbag to counterweight the modifier. It may be because I am using an extension head rather than the weight of an entire moonlight on the focusing arm. Although I believe the Bounce Rod would support the weight of a moonlight I would highly recommend NOT using that method.

One item that was NOT included with the Bounce Rod is a flash head bracket. I thought this was very strange since in order to use a focusing arm, one needs to have a strobe head holder. In the image above I am using a Cheetahstand BirdCage for Chopsticks for Bowens mount lights. Because I have a number of focusing rod modifiers, I have several extras. But if you order a Bounce Rod, be sure to obtain a light cage of some sort.

The construction of the Bounce Rod is excellent. The only part I will replace is the pivot swivel handle. It is made of plastic and does ratchet, however the ‘feeling’ of the lever does not instill confidence in me. That is NOT to say it will break, it just means my preference for a piece of hardware that provides this much torque should be metal.

The focusing rod is located on the top in this photo. The leverage rod is the bottom one. Both are removable from the bracket and easily store in the supplied carry bag. The plastic swivel handle is located in the U shaped bracket. The whole bracket is well constructed. 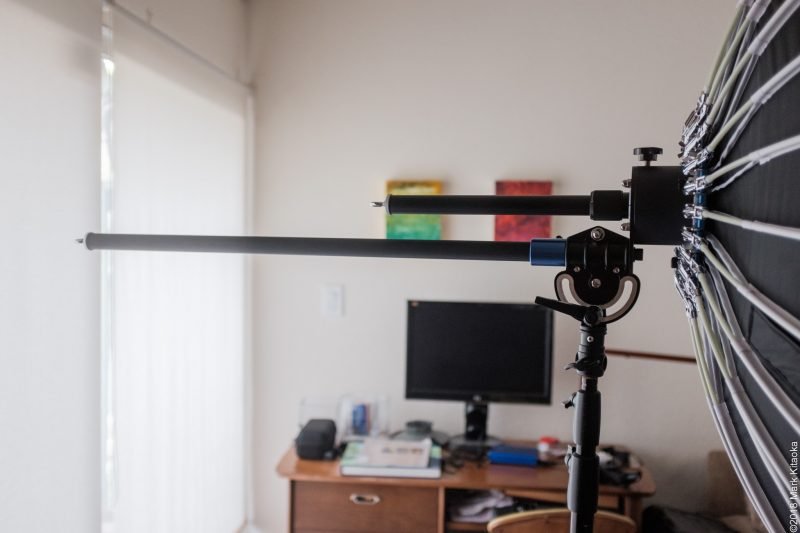 I’m all about options so I appreciate that the bracket has both a vertical and horizontal mounting hole. IF I’m ever inclined to mount this modifier facing down on a very sturdy light stand I have that ability. 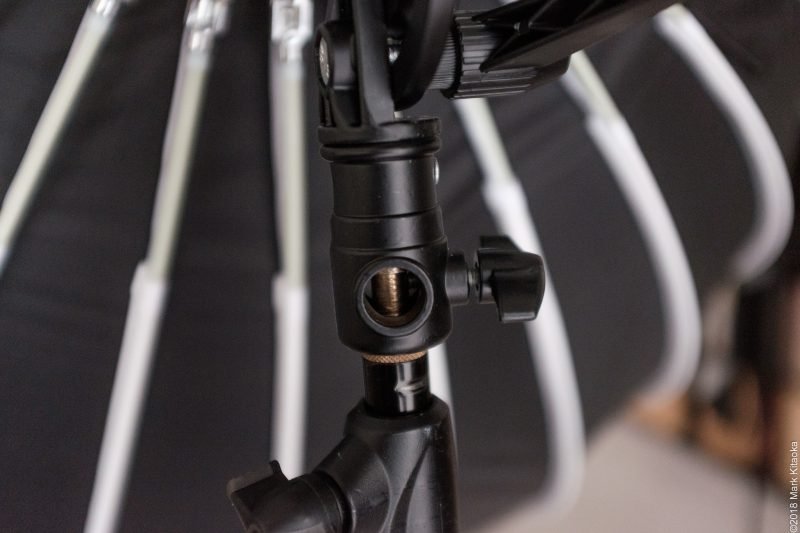 The focusing rod has two sections, the first slides into the housing and is secured by the turning knob on the top of the main cylinder. It can be moved in and out as needed for distance. The second portion is adjusted using a friction knob. My preference for using the focusing rod is to slide the first section all the way into the cylinder and use the friction knob portion to move the light to the fully focused, flooded or anywhere in between position. 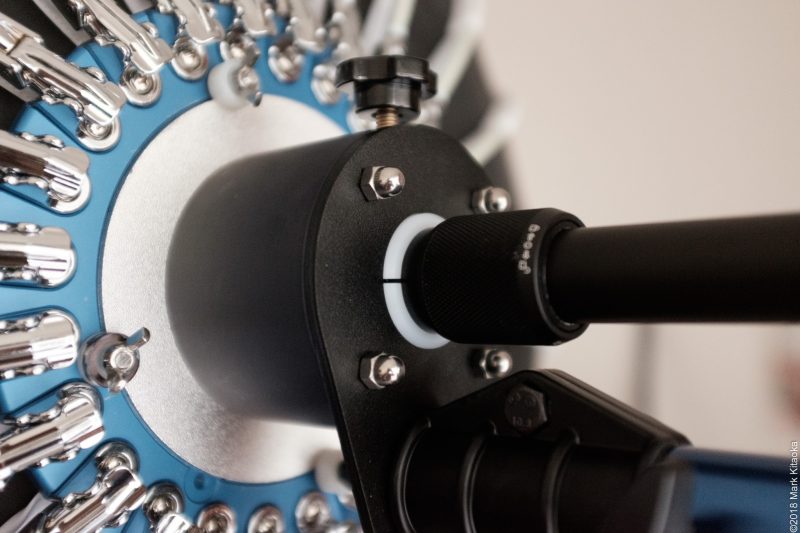 This is an example of how I adjust the light position.

One of the most attractive aspects of the large Bron Para line with focusing rod is its ability to replicate a ring light flash and sculpt the light by simply adjusting its angle. But unlike a ring light the ability to stand in front of the modifier while still creating a shadow less light on the talent is wonderful. And then the ability to sculpt the shadows simply by turning the angle of the para to remove or add light to one side or the other is another fantastic feature. Bron has created a well done video about the method to which I’m referring.

To determine if the Grand can accomplish the light control of the Bron, I ran a preliminary test with my partner. Here are my results: 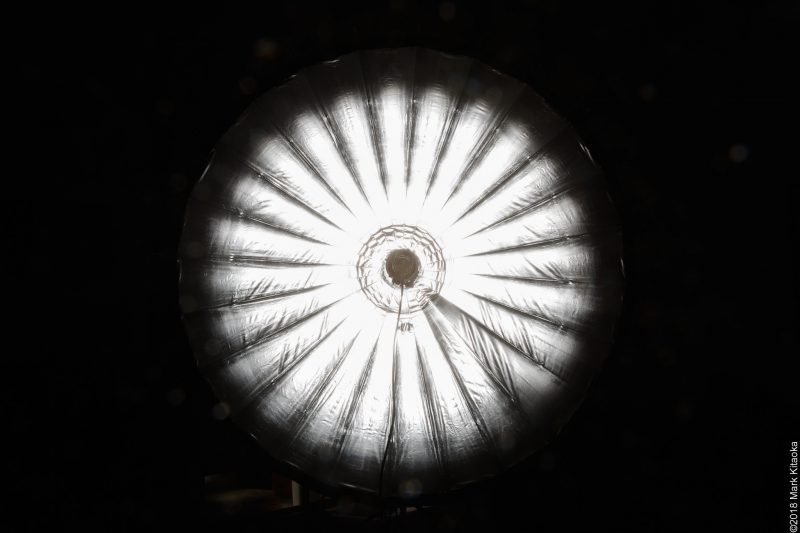 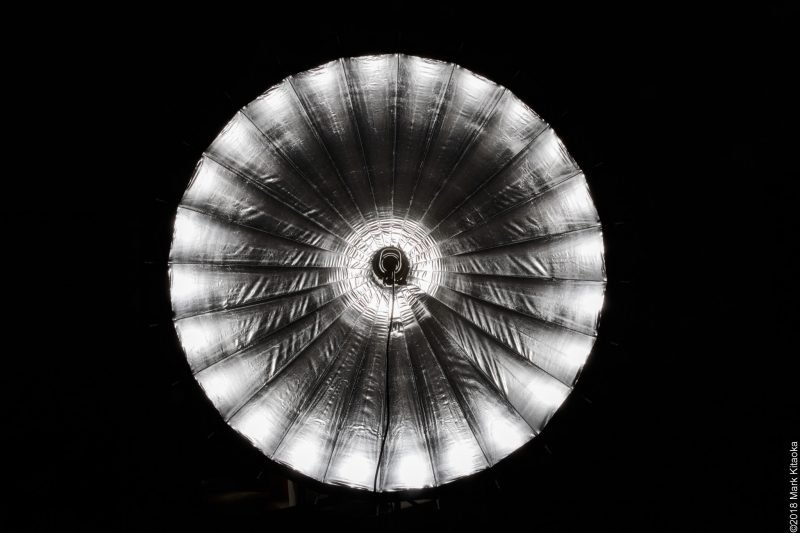 The light position in its fully flooded positon creates a ring light affect which is wonderful. As you can see in the photo the light is shadow less, much like a ring light. I was standing directly in front of the modifier and my partner is about 9 feet in front of me. 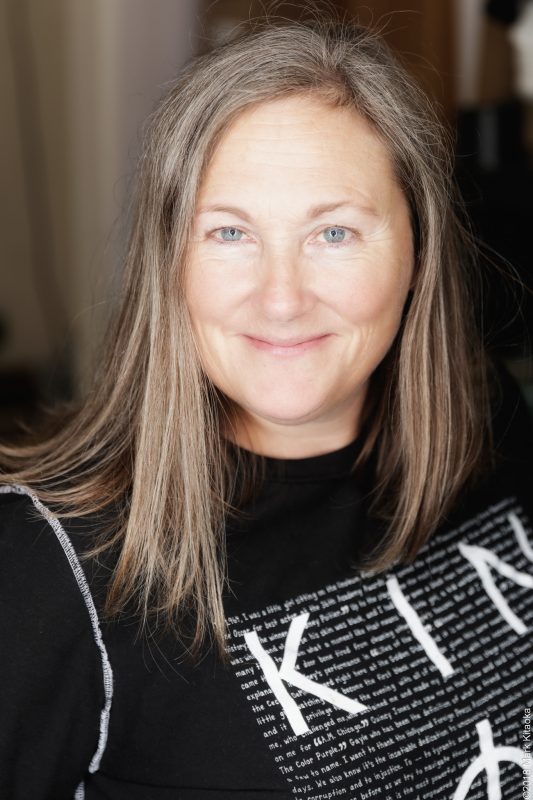 A close up of her eyes reveals the ring light affect. 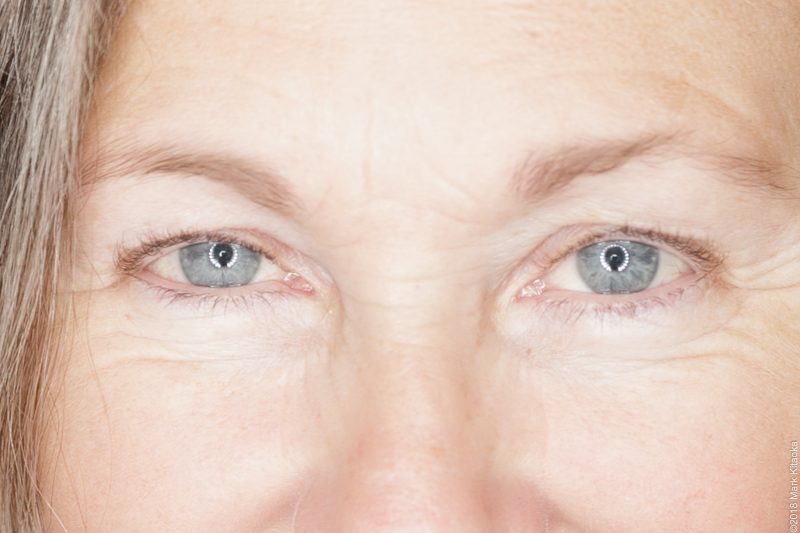 All of this means very little if the light quality of the Grand is not excellent. BUT having said that and having had experience using quite a few modifiers I can say with 90% certainty that this will easily compete with the Bron’s quality of light. In early September I have scheduled a shoot with talent to actually test this modifier in a studio session. Of course I’ll be posting my thoughts and images here. I’m really excited about this modifier!