During a recent client sessions, both of which were on location I had the chance to use the AD600 Pro in combination with a number of modifiers. Because the remote head for the Pro is not yet released I did not use any focusing rod modifiers. In one session where I cannot release the images at this time, I used the Pro in an Elinchrom 69″ Octa with both diffusion panels installed. I did not go over 1/4 power and was shooting HSS with my Pentax 645Z. The unit performed flawlessly.

In the session I can post images below I used the Pro in a SMDV 44″ (110cm) octa with both diffusion panels installed. The interior of the theatre where I was doing these portraits was very dark so I appreciated the very bright modeling light so that I could easily obtain focus. To date I’ve found the Pro model exemplary in recycle time, modeling light and ease of use. 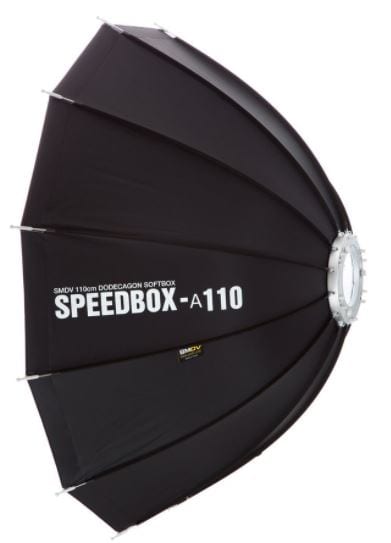 A few years back I purchased a SMDV S70 28” softbox when I was using speed lights with modifiers. I was impressed at the quality of the light, but even more so with how it opened and closed with ease! Later Adorama started selling their own version of the softbox under the GlowPop brand. They use the very same mechanism as SMDV for opening and closing the unit. I bought one of the GlowPops for quick run and gun shooting and liked the light weight both units provided. I changed both of those modifiers from the speed light bracket to Bowens brackets since I no longer used speed lights.

I recently wanted a more robust modifier that would set up quickly and have a better attachment system than the SMDV or the Glow Pop. Both of those hold the speed light or Bowens bracket onto the speedring with VERY SMALL SCREWS and on both the GlowPop and SMDV units I own, they have stripped out. We’re talking Phillips screws so small you must use a jeweler’s screwdriver to remove or install them. That’s small!

I’m also in the process of ‘paring down’ the number of modifiers I’ve collected over the years. My personal rule of thumb is if a modifier like my Zeppelin 47” with its heavy mounting bracket can be replaced by something within 10% of its size I’ll do it! You see I use focusing arms for many of my modifiers so I seldom use the diffusion panels that come with the modifiers. After doing some research I found that SMDV sells an A110 softbox that measures 44”, close enough! Plus it’s much lighter and a great shape for ‘parabolic’ focusing using a focusing rod. And their signature opening and closing mechanism makes it even sweeter to replace the Zep.

The largest GlowPop made is 38” and still uses those tiny damn screws to hold the bracket onto the speedring. The SMDV makes a 44” which fits within my personal parameters when I’m considering replacing another modifier for various reasons, in this case my 47” Zep.

So here are some of my initial tests using my trusty buddy “Bob” to ascertain the light qualities/spread/focusing capabilities of the modifier. If you are not familiar with focusing arm modifiers I suggest you search the web. This post is simply about my own findings with the SMDV 110. As I use this on real client sessions I will be updating this post. If at some point I opt to use the SMDV 110 with its included diffusion panels I will post those images as well.

So remember this is ONE LIGHT, ONE MODIFIER and simply angling the modifier to the left or right or focusing or flooding the light produces dramatically  different looks. It’s just ONE of the reasons I love focusing arm modifiers. And the SMDV 110 is perfect for my needs. Well made, well designed and the quality of light it produces makes it a great choice for me. Oh and the weight and ease of assembly is just icing on the cake!

Can you do me a favour and measure the diamter of the speed ring insert?