I Need a Basketball

One of the largest benefits of living a life full of experience is it allows one to gain self confidence. Experience brings with it lots of knowledge of human nature as well as an understanding that we are all alike in so many ways. We share the ups and downs of life, the successes and failures which are all a part of humanity, of our lives as brothers and sisters on this Earth.

In the 38 years before becoming a professional photographer my life was in the corporate world. And as I look back I’m a bit shocked at how many different careers I’ve had. Law enforcement, retail, security, energy, finance, brokerage, risk management, software and training are the major industries in which I’ve worked. I’ve held titles from part timer worker to COO of a Fortune 50 company and have had the chance to work with many different personalities and genders. What I found over that time, no matter what our status is in life; was we all breathe, pee, poop and put on our pants one leg at a time. The major differences are how we feel about ourselves and how we treat others.

In 2011 when I was laid off from what would be my final corporate job I did what most people do. I reassessed my work life and options. It was at that point when I decided that I would run my own small business as a professional photographer. And I made a promise to myself that I would no longer work with those who I didn’t truly like as people. I figured that enduring 38 years of working with some people who I did not respect as people was enough for one lifetime. Now don’t get me wrong, lots went into my decision and it was not as easy as snapping my fingers to make it so.

My children were adults, my mortgage was about at its end, tuition was paid for and my expenses were low. I had amassed a few regular photography clients when I moonlighted during my day job. So I figured it was time to ‘man up’ and follow my dream.

In 2013 I was contacted by a VP of Marketing for a major symphony in the US. He asked if I would consider photographing for his new assignment and I was thrilled. We had worked together before and I was honored that he wanted me to shoot for his new employer. We seem to have a tradition; my first assignments with him always seemed difficult, very difficult! At his last position he called and said “I have good news and bad news. The good news is your first shoot will be for Disney Theatrical. The bad news is your first shoot is for Disney Theatrical. Oh and the director for the show just won a Tony Award for directing. He wants to be in the session, as will the President of Disney Theatrical.”

So as not to break our tradition my first shoot at his new company would be with their world renowned conductor and then followed by 95 head shots of each musician in their orchestra. “The head shots will have to be either before/during intermission/or after the performance. And the last photographer was fired because the conductor didn’t like them.”

“Aren’t the musicians anxious to get ready/have some refreshments/go home in the time slots you’re allotting for me?” was my question. “Yes but it’s the only time we can arrange their shots to be taken based on when we need them for marketing. And the Maestro doesn’t like having his photo taken in studio, so as a result he’s often a bit irritated during those sessions. Thanks for agreeing to come out, let my assistant know what equipment you’ll need to rent here.”

My partner and I always do research on the talent prior to any new shoot. She found that the Maestro was a huge fan of the Dallas Mavericks basketball team. So I contacted my pal here in the Bay who is a sports writer and asked him some questions about the Mavs. When I called the client’s assistant back with my list of photography rental gear I also said “Oh and I’ll need a basketball for the session.” “Um our connection must be bad, did you say a basketball?”

On the day of the session the Marketing VP said “The Maestro has been under tremendous stress preparing for the concert. I feel it would be best if there are as few people as possible during the session, so I’m going to excuse myself once I do an introduction. You will only have 35 minutes to photograph him. You and Tracy will be the only ones in the room. How does that sound?” I agreed.

So like all sessions, nothing ever goes exactly as planned. That fact just comes with the territory. I looked at my watch and we were already 20 minutes past my allotted time to photograph him. He then entered the studio with his assistant, the President and CEO of the symphony and the Maestro’s long time friend and companion. So much for an intimate group, eh? He was visibly irritated but immediately looked on the grand piano where I had placed the basketball. “What is this?! What is this for?” were his first remarks. “It’s for you, I wanted to see if you can dribble a basketball!” 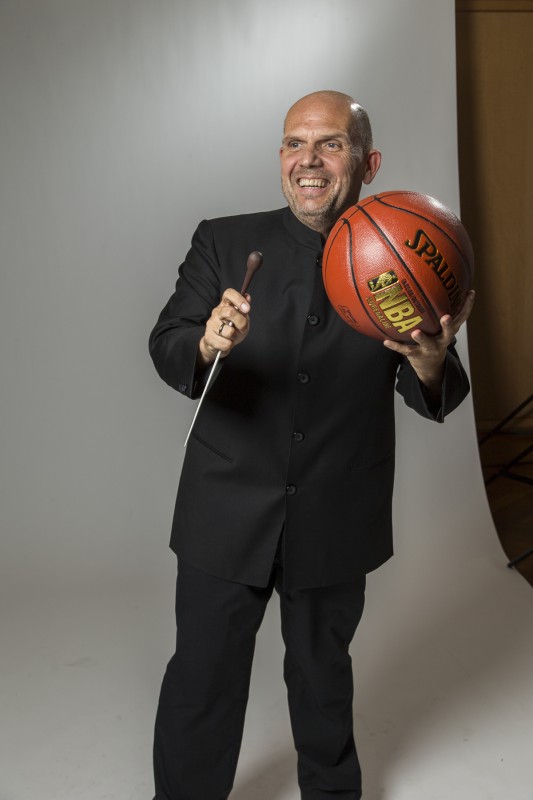 He immediately placed his baton on the piano and picked up the ball and began dribbling on the seamless. He smiled at me with one of those ‘see smartass I can dribble!’ expressions. So I said, “Well even I can do that and I’m Asian so let’s see if you can spin it on top of that baton of yours!” And I’ll be damned if he didn’t try! Holy shit! So I began shooting and his pal, a huge fella kept kidding me about how I should have selected ‘a real camera…a Nikon’ as I was shooting. So I stopped shooting, walked over to him and handed him my camera. “OK let’s see what YOU can do with a REAL camera!” was my response as I then walked onto the seamless with the Maestro. I put my arm around him and together we began taunting him since he started making excuses about controls in different spots, etc. “Come on, listen to him, take our photo!” was the Maestro’s chant.

I got all of the shots I needed of the Maestro in 8 minutes and got him out on time based on our planned schedule. So what is the point of all this? Unless you like people, shoot landscapes, animals or products. Take a genuine interest in who you’re shooting, get to know them even if it has to be when you first meet them. Your photograph is a reflection of you as well as the talent. I’m fortunate that so many of the people I photograph become friends afterward. Sure not all do, but even for those I just encounter in that moment for me as well as for them, it is an experience more so than just a photograph. That’s something that happens at the DMV when you get your driver’s license photo taken. I will recall a photo but more often I remember the experience, the person and our encounter. And in this case the Maestro is someone I truly like and respect. For no matter how famous or powerful someone is in their field (or in their mind) they still pee, poop and put on their pants one leg at a time…just like me.