To the horror of my own children and friends I enjoy the breakfasts at McDonalds. “A number 2 with orange juice please” can be heard whether I’m driving through or ordering from the counter. Mmmm, a sausage McMuffin with egg, hash browns and a juice. I was literally giddy with delight when my local branch announced breakfast would be served after midnight!

The other day I had an early appointment with a prospect, so I thought I’d stop before heading to my meeting to grab a “Number 2 please” since our meeting would prevent me from having lunch. As I stood in line an elderly man ahead of me was ordering. His tone and rudeness to the clerk was palpable. “Gimme this, hurry up, can’t you get it right the first time?! I want extra cream, make sure it’s hot. I don’t like your cups.”

The clerk was very patient and kind, much more so than I could ever imagine myself. I wanted to speak my mind to the man ordering. It took all of my strength and the words of my own kids (“Dad is often only ever ten seconds away from telling someone who pisses him off to Fuck Off!”) Nope, this time I bit my tongue and after the bleeding stopped I didn’t feel any better for holding back.

Later I decided that should that situation happen again I would simply say “Excuse me, but growing old does not entitle you to be rude. For that you’d have to return to being a teenager.”

Aging is certainly not for pussies. And it’s something most of us dread and all of us deny. If you’ve been living under some rock just look around while you’re out in the sunshine. The televised cigarette ads of the 1950s have all been replaced by the pharmaceutical messages. Cialis, Abilify, Celebrex, Mylan, on and on and on. Go to any department store and look at the size of a cosmetics section.  Research the income for companies which produce hair loss treatments, cosmetic surgery, body sculpting. Those industries rival National Defense spending! 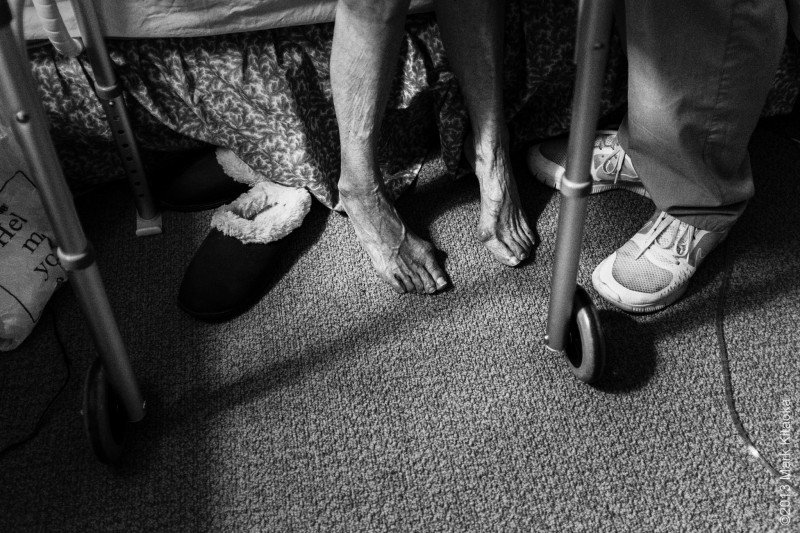 Two years ago my sister and I made the very tough decision to place my Mom into an assisted living home after she suffered a heart attack. She had lived completely independently for 37 years after my father passed away. Then after suffering four separate choking incidents where she needed to be revived we moved her to a board and care. She still retains most of her mental acuity, but occasionally forgets things. So I’m reminded each day how a woman who was fiercely independent now relies on her children for care. She’s 87 now and I’m sure she’ll live to be 200.

There are several things that I’m sure Mom never said:

“I want to become a burden to my children.”

“I want to lose the right to drive myself everywhere.”

“I want to look in the mirror and wonder, who is that?”

“I want my children to bathe me.”

“I want to lose the ability to eat or feed myself.”

As I watch my mom I realize that when my patience wears thin she is no different than an infant. But unlike an infant whose future lies ahead, the elderly are approaching the end of their lives. We naturally understand when an infant doesn’t know our name, can’t speak to tell us what’s wrong or throws their food on the floor just to see what happens. Later though they will throw things onto the floor just to see what you’ll do.

What we realize and what gives us patience with infants is we know that it’s simply a temporary condition, a rite of passage. They will grow, become independent and gain more and more skills to be on their own. But just for a moment imagine how our attitudes would change toward infants if:

We were disgusted for having to change their diapers.

Expected them to take their own medications

Transport themselves to doctor appointments

Financially contribute to the household

Make their own dinner

Say our names consistently and recall and articulate all daily events

And show us love whenever we expect it

What sort of dignity would a child raised in that manner develop for themselves? How fair would it be to expect behavior that isn’t appropriate for an infant to perform those functions? Unreasonable right? Sometimes when we’re tired from our days all or some of these can be a burden. Yet if I told you that your infant was going to pass away the next day or in six years, would you view that list as quite the burden as it was before?

Life isn’t very fair, well in lots of cases, not fair at all. The elderly, those who we became accustomed to talking with and depending upon are not quite as cute as infants because we have a different expectation. They, meaning all of us HAVE cared for themselves and now they need our help in the very same way infants need our help.

I know that the next time I become frustrated with my own Mom’s needs I will remember the infant she’s become. But unlike the hope of many years with an infant, she has a limited time for me to show her how much I care for her. One of those ways is sharing my McMuffin order with her.