My photography partner and I have been creating hand painted backdrops for ourselves. So it was a perfect time to use the incredibly bright constant LED light and then do a quick test of the strobe feature to see how the backdrop looks in an actual photo.

The lighting in the room where the backdrops were painted is awful! So having the FV150 turned up to 100% and modified through a lantern softbox was perfect!

This is the scene before using the FV150 during the daytime with the door and windows open. 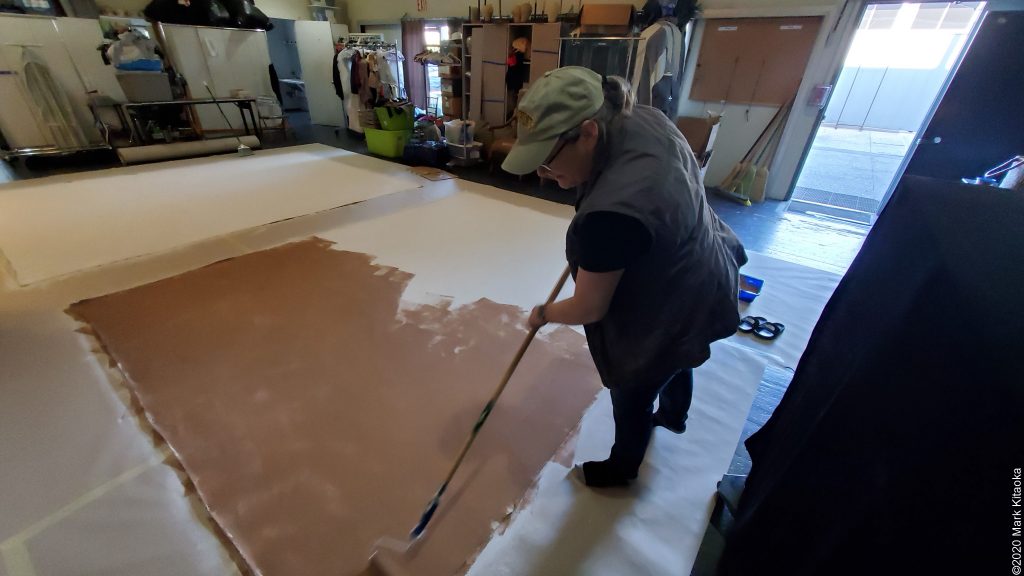 Here are some quick test shots of actors and the director who just happened to be working in the theatre that day. So during a break I grabbed them for some quick shots using the strobe feature of the FV150. The modifier I used was a Glow 41″ EZ Lock Deep Umbrella. I just grabbed what was convenient before heading over to do the job. Pentax 645Z with my 45-85mm f4.5 lens.

Again the FV150’s strobe feature does not rival a normal bulb strobe. BUT the possibilities of its uses are endless and I have yet to even scratch the surface of what I can do creatively with this light. Stay tuned.

Today I was able to test the FV150 on a human! LOL

Jenn was here for a headshot and I talked her into indulging me with a test of the FV in both LED and strobe mode. I used the CLAR Slim 10″ Round Bi-Color LED as a hair rim light. Key light modifier was my Parabolix 35D with the FV150 in mid focused position. Modifier was camera right 4 feet from Jenn pointed completely away from her face. This is my normal configuration when using that modifier. Camera is my Pentax 645Z.

So this was a two light shot test of constant lights. I’m NOT accustomed to using constant lights and for a time it felt a bit like well, cheating. WYSIWYG

I’m just about ready to put the FV150 into production after one more test. It’s a remarkable tool for the right job.

I wanted to test several more aspects of this light. First if I can effectively use it in my focusing rod modifiers. Second to test the use of my Aputure Spotlight for gobos with the flash feature and then with the constant light feature.

Here is my initial setup. I am using the Chopstick Reflective Focusing System MKII. I have found this to be the best general focusing rod for my use. Versatile, well made and very sturdy. At 160.00 USD a very good value. For all of the  following images I used one of my favorite modifiers, an Elinchrom 39″ Rotalux Deep Octabox which I use with and without the focusing rod. 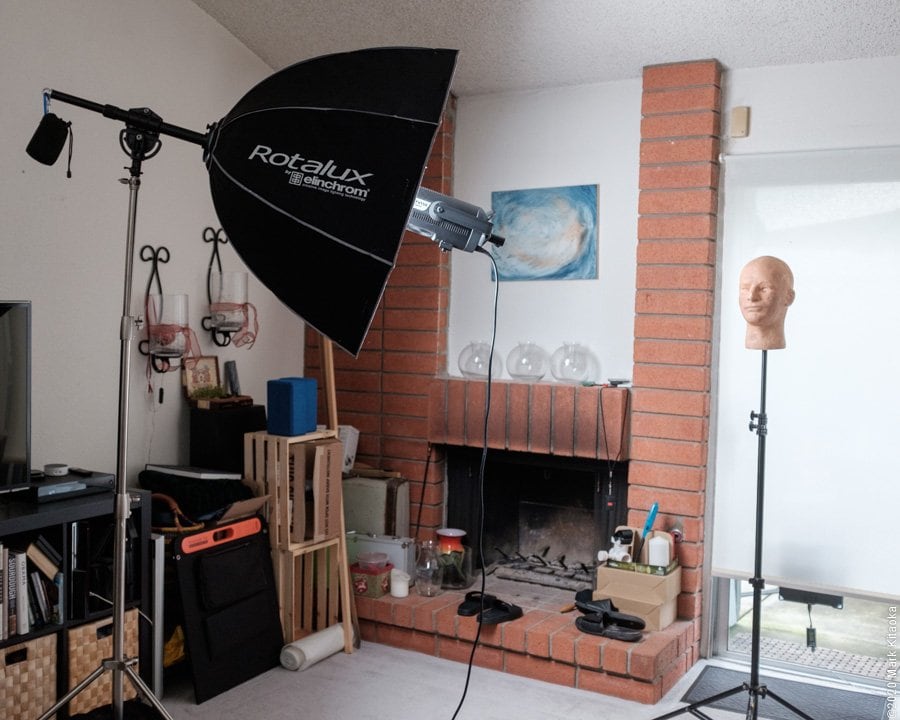 The FV150 in strobe mode projects the same quality of light characteristic as my bulb strobes with a focusing rod.

Next was using my Aputure Spotlight with the FV150 alone without my Saberstrip v2.0 turned on for fill.

Set up for the strip of light shot. 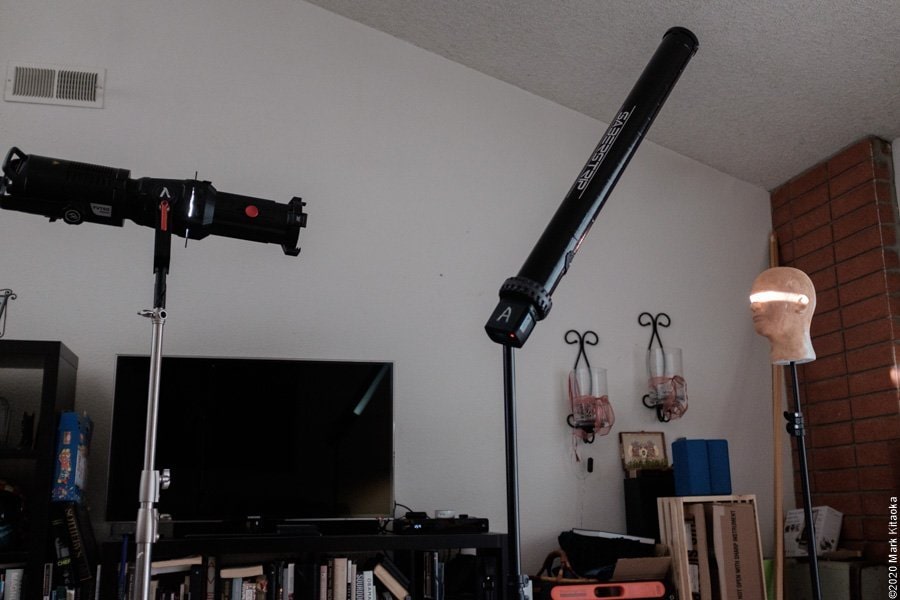 Testing various gobos with the Aputure Spotlight and the FV150 set to full power in strobe mode.

Next I wanted to test using the FV150 as a strobe and compare it to using the LED constant light mode through a gobo and the Aputure.

So as I go about this and more testing I’m finding that like all things you don’t get something for nothing. I have been using battery powered and remote head conversion strobes for the past three years. Moving back to an AC only plug in system seems to be a bit of a pain. BUT the versatility of combining a powerful constant light AND a usable strobe in one light takes the sting out of an AC only light. I’d only tend to use this in studio, not because of the AC only aspect since I can use a generator or inverter out in the field. Nope it’s because the strobe is not strong enough to overpower the sun. At least in my view at this point even though I have not tested it in full sun.

One of my lighting mentors has been using constant LED lights outdoors so I will try this as well. One thing is so apparent to me right now; LED lights are the future of lighting, at least to me.

Seriously?! OK so I just had to test HSS with my Canon 1DXII shooting 14 frames per second just to see the performance in HSS…..

No matter how long I kept the shutter depressed, NOT ONE MISFIRE OR SKIP in the flash mode! Holy crap. More testing needs to be done of course, but so far my mind is exploding with the new possibilities of this light. A constant LED AND strobe with this kind of performance? Holy shit man!

I recently received and am testing what I consider to be a very exciting light the Flashpoint FV150 Hybrid R2 Continuous LED Light and HSS Flash (Godox FV150). Please note that this post is only my initial examination and testing of this light. Because I am in the height of my shooting season I have little time to fully test this light until later in the month. BUT I was SO INTRIGUED by its possibilities I sandwiched my initial evaluation between client sessions. For me this new instrument’s possibilities are mind bending! 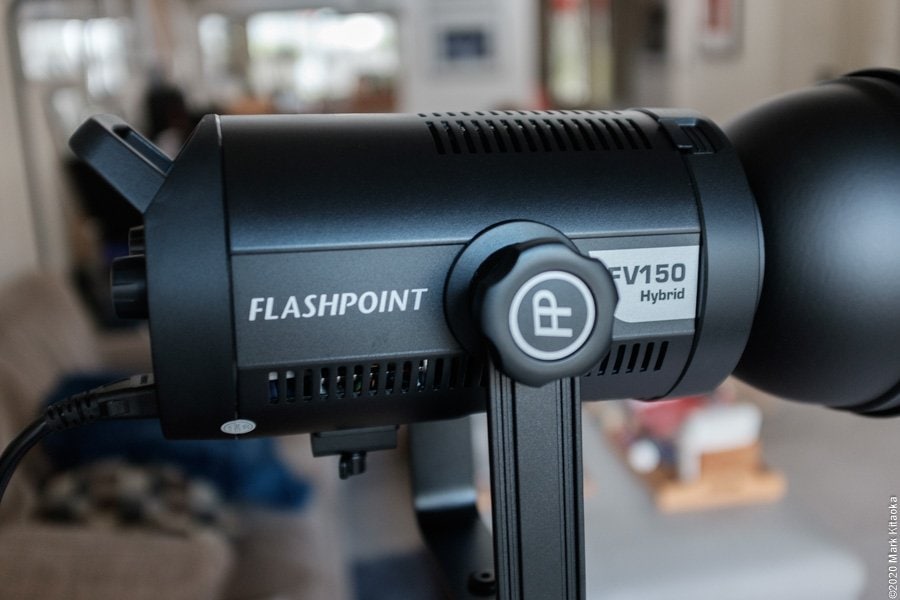 Right off the bat a huge plus for this unit is its ability to natively attach to my Aputure Spotlight without my DIY adapter. For anyone who has tried to mount an AD600/400/etc. to the Aputure, you know that the bulb fouls against the inner lens of the Aputure unit. Not so with the FV150 since it is a flat LED light. SCORE! Plus I can now use the Aputure/FV150 combination in video with gobos. Excellent!

So here are my power test results:

I have several Westcott Skylux LED lights so I tested the FV150 against them. As you can see the FV150 is twice the brightness of the Skylux. For the strobe test I compared the FV150 to the Flashpoint XPLOR 600 HSS TTL Battery-Powered Monolight. It’s safe to say that the FV150 is about 25% the power of the 600. So in my testing I’d place it in the 150WS category.

There are a TON of features in this light I have not even examined. I will just say that my mind is exploding with concepts that I may be able to accomplish with this light that would have been much more difficult in the past to perform. For those that are thinking “Gosh isn’t this just a low powered, plug in strobe with a fancy modeling light?” I’d suggest you move along…..

For those who may see new possibilities, stay tuned – MUCH more to follow!